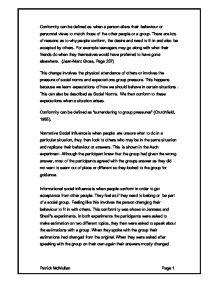 Conformity can be defined as when a person alters their behaviour or personnal views to match those of the other people or a group.

Conformity can be defined as when a person alters their behaviour or personnal views to match those of the other people or a group. There are lots of reasons as to why people conform, the desire and need to fit in and also be accepted by others. For example teenagers may go along with what their friends do when they themselves would have preferred to have gone elsewhere.  (Jean-Marc Gross, Page 237)

This change involves the physical attendance of others or involves the pressure of social norms and expectations group pressure. This happens because we learn expectations of how we should behave in certain situations. This can also be described as Social Norms. We then conform to these expectations when a situation arises.

Conformity can be defined as “surrendering to group pressures” (Crutchfield, 1955).

Normative Social Influence is when people are unsure what to do in a particular situation, they then look to others who may be in the same situation and replicate their behaviour or answers. This is shown in the Asch experiment. Although the participant knew that the group had given the wrong answer, most of the participants agreed with the groups answer as they did not want to seem out of place or different so they looked to the group for guidance.

Informational social influence is when people conform in order to get acceptance from other people. They feel as if they need to belong or be part of a social group. Feeling like this involves the person changing their behaviour to fit in with others. This conformity was shown in Jenness and Sherif’s experiments. In both experiments the participants were asked to make estimation on two different topics, they then were asked to speak about the estimations with a group. When they spoke with the group their estimations had changed from the original. When they were asked after speaking with the group on their own again their answers mostly changed back to their original answers. This shows that the participants wanted to fit in with the group and did not want to

Kelman (1958) suggested three reasons of why people conform. Kelman’ stated that he thought a person could agree when they are in public with a group of people, although their own personnal beliefs are different. This does not lead to a change in the person’s views or beliefs so these feelings are temporary. The identification stage says that the person takes on the beliefs and views of a group which they admire so they become accepted. This also does not lead to a permanent change in the persons beliefs. Internalisation involves when a person behaves or agrees with a person or group of people, this is because they have accepted the views and beliefs. This results in the person changing their beliefs and attitudes. This may result in the person having longer lasting effects than public compliance as they both publically and physically conform.

Public compliance is when a person behaves in a certain way or accepting views consisting with the normal behaviour to gain acceptance from a group without accepting it as their own. Private compliance is when a person behaves the same way as others as they believe this is the normal behaviour. They internalise the views and beliefs as their own. (Miller, Arthur G. Social Psychology of Good and Evil.)

Further research was carried out by Jenness (1932). Jenness questioned participants in isolation to estimate how many beans a bottle contained. The aim of the experiment was to see if participants would be influenced by others to provide an answer when that answer is not obvious. Jenness placed all the participants into a room. When they were all together with the bottle he asked them to take part in a group discussion and asked them to provide a group estimate. After they agreed on a group estimate Jenness asked the participants to estimate the number again when they were placed on their own again, this was to find out whether their initial estimates had actually changed based on the influence of the majority. The results showed that nearly everyone who took part in the experiment had changed their answers. Jenness’ experiment is an example of Informational Social Influence as the participants conformed to gain acceptance from the others. The method used by Jenness has been criticised for not being thorough enough. This experiment was the beginning of numerous other conformity experiments, which also used comparable methods such as Sherif’s (1935).

Sherif showed participants a still projected point of light in the dark and were asked to estimate how far the light had moved against a wall, first they were asked on their own, then in a group. When alone, participants developed their own estimates and then when they joined the group the estimates became closer and closer until the group agreed on an answer. When the participants were asked again almost all of them went back to their original answer as they felt correct. These results showed that when a person is in an uncertain situation they will look to others for guidance and adopt the group norm; this is known as informational conformity. This experiment is also an example of Informational Social Influence. Asch criticised Sherif’s experiment on the grounds that the experiment was too ambiguous. Another criticism of Sherif’s experiment is that he used deception as he told the participants the light was moving when it was not.

Asch’s (1956) study was aimed at discovering whether or not a majority would influence a minority even in a clear-cut situation. He formed groups of 7 or 8 participants. He used a lab experiment to study conformity. Using the line judgment task, Asch put a participant in a room with seven confederates.  The confederates had agreed with Asch in advance what their responses would be when presented with the line. The real participant was not aware of this and was led to believe that the other seven participants were also real participants like themselves.  Each person in the room had to say out loud which comparison line (A, B or C) was most like the target line. The answer was always obvious to the participant.  The real participant sat at the end of the row and gave their answer last.  In several of the trials, the seven confederates gave the wrong answer.  There were 18 trials in total and the confederates gave the wrong answer on 12 trails.  Asch used this method as he was interested to see if the real participant would conform to the majority view. The results showed that on average, about 32% of the participants who were taking part in this experiment went along and conformed to the clearly incorrect majority.  Out of the 18 trials about 75% of participants conformed at least once and 25% of participant never conformed. When they interviewed the participants after the experiment, a majority of them said that they did not believe their conforming answers had been correct, but had gone along with the group for fear of being ridiculed or thought of as being "strange". When the participants were interviewed after the experiment, most of them said that they did not really believe their conforming answers were correct, but had gone along with the group for fear of being ridiculed or thought "peculiar".  A few of them said that they really did believe the group's answers were correct. This experiment is an example of Normative Social Influence as the participants were unsure what to do during the experiment. The Experiment was criticised as all participants were male students who all belonged to the same age group which would result in a biased test.  The task was also simulated and it is unlikely to happen in everyday life. Therefore, it is not similar to a real life situation demonstrating conformity. (Jean-Marc Gross, Psychology AS for AQA)

Additional research into people’s conformity to social roles was carried out by Zimbardo (1973). The aim of the experiment was to find out if Americans would obey an unjust order to inflict pain on unknown people.

40 male participants were chosen after replying to a local newspaper ad.
At the start of the experiment they were introduced to a man called Mr Wallis. Mr Wallis was described as a mannered man in his fifties; he was then attached up to a charge generator. He was a confederate.

The participant who was known as the teacher was placed in another room and the teacher tested 'Mr Wallis' on a series of word pairs, when the student got an answer wrong, the participant was ordered to give him an electric shock. The shock increased as the student answered more incorrect answers; the shock started from 15 and had capacity of increasing and putting out 450 volts.

Each time the shock was administered by the teacher, a pre-recorded sound was played which indicated Mr Wallis was varying in different levels of pain, this happened until after 315 volts when there was then a strange silence. An extra confederate called “Mr Williams”, wearing a lab coat encouraged the participant to carry on (Mr Williams was seen as a figure with great authority). All the participants shocked the student to at least 300 volts. 65% shocked the student the whole way to 450 volts.  This experiment showed that, under certain surroundings, most people will follow orders.

Gender has been said to have an impact on conformity, research has shown females conform a great deal more than males. This has been suggested to happen because women are more socially oriented. Eadly & Carli (1981) argued that this is because researchers use tasks which are a great deal more familiar to men so they don’t need help in carrying the task out. This could explain their findings that male researchers are more likely than female researchers to conform. This is one example of gender bias during experiments.

Culture also has an effect on conformity. Collectivist countries such as Asia and Africa promote working and group work compared to that of an individualistic country such as Europe or the United States where independence and initiative is promoted. This results in people who live within collectivist countries conforming to the views of a group, rather than voicing their own.

Based on the research which has been presented as to why people conform it is visible that some factors are stronger than others. If the person is self conscious which usually results in the person having very little confidence, means they are more likely to conform. This person is less likely to stand up for their beliefs in a group and follow the Informational Social Influence theory. The personality factor is what appears to be the strongest reason as to why people would conform, and this is strongly related to Information Social Influence also as the person wants to fit in with the group, so that they feel normal and don’t feel excluded although if the person as a strong and confident personality they are more than likely to stand up for their views.. This was shown in Asch’s study. This is also strongly linked with the culture, as people from America and less likely to conform than the likes of Asia or Africa as they are promoting independence. Females are also more likely to conform as they are more socially orientated than men.