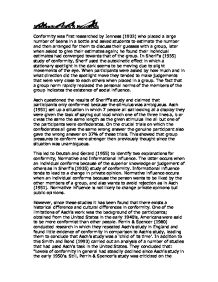 Introduction, Aims & Hypothesis Conformity was first researched by Jenness (1932) who placed a large number of beans in a bottle and asked students to estimate the number and then arranged for them to discuss their guesses with a group, later when asked to give their estimates again; he found their individual estimates had converged towards that of the group. In Sherif's (1935) study of conformity, Sherif used the autokinetic effect in which a stationary spotlight in the dark seems to be moving due to slight movements of the eye. When participants were asked by how much and in what direction did the spotlight move they tended to make judgements that were very close to each others when placed in a group. The fact that a group norm rapidly replaced the personal norms of the members of the group indicates the existence of social influence. Asch questioned the results of Sheriff's study and claimed that participants only conformed because the stimulus was ambiguous. Asch (1951) set up a situation in which 7 people all sat looking at a display they were given the task of saying out loud which one of the three lines a, b or c was the same the same length as the given stimulus line all but one of the participants were confederates. ...read more.

They were then shown the jar of lentil. After handing back the answer sheet the participants were debriefed as to the true nature of the 'competition' and asked not to discuss the experiment with any fellow colleagues for the rest of the afternoon. Controls and ethics * Counterbalancing control used in that experiment was conducted on one afternoon, the aim of this was to prevent tutors discussing the experiment with other tutors who potentially could have been participants therefore ruling out any order effects. * The fake answers in each of the conditions remained the same for each participant, this was to keep things standardised and so ruling out the possibility that differences in estimates were due to differences in fake answers. This was coupled with standard instructions. * Teachers who were held to have knowledge of psychology were excluded from the study; this was to control the potential of the Hawthorne effect. * Clearly where deception is used there will always be a lack in informed consent but this is justifiable using a cost-benefit analysis. It was decided the deception was of a very minor nature and was not enough to amount to cause emotional disturbance in anyone. Also the estimate that was to be obtained from the participant was considered trivial information, and when debriefed some participants who were deemed as conforming claimed they were giving a genuine independent estimate suggesting they didn't feel deceived. ...read more.

This would provide more of an insight on the factors that affect conformity i.e. culture, education, age etc. 2. Creation of an unambiguous situation. This would allow contrasting of both types of social influence which would provide a broader understanding of levels of conformity and allow us to distinguish which of the two is a stronger influence in our willingness to conform. 3. Involve real life participants that are there to represent social influence this is because in this investigation the presence of people was made through fake answers which inevitably produces a different reaction in some participants than if they were to encounter real persons. Appendix 2 Results-Mann-Whitney-U-Test Formula for Mann- Whitney- U- Test of significance U = Na* Nb = (Na* (Na+1))-T 2 Na= number of participants in condition A Nb=number of participants in condition B T= total sum of ranks in condition A Thus: U= 16*16+ (16*16+1)- 240.5 2 U= 256+ 257- 240.5 2 U= 256+ 128.5- 240.5 U= 384.5- 240.5 U= 144 The forth step was to calculate U' (U prime) the formula for this is: U' = NaNb - U Thus: U' = 16*16- 144 U' = 256- 144 U' = 112 The tabled value for significance at 0.05 was at 60, the U' has to be less than this value (60) for the null hypothesis to be rejected and the experimental hypothesis to be proved. ...read more.