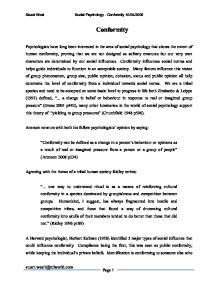 Conformity Psychologists have long been interested in the area of social psychology that shows the extent of human conformity, proving that we are not designed as solitary creatures but our very own characters are determined by our social influences. Conformity influences social norms and helps guide individuals to function in an acceptable society. Many factors influence this vision of group phenomenon, group size, public opinion, cohesion, status and public opinion all help determine the level of conformity from a individual towards social norms. We are a tribal species and need to be accepted on some basic level to progress in life both Zimbardo & Leippe (1991) defined, "... a change in belief or behaviour in response to real or imagined group pressure" (Gross 2005 p442), many other luminaries in the world of social psychology support this theory of "yielding to group pressures" (Crutchfield 1948 p506). Aronson concurs with both his fellow psychologists' opinion by saying: "Conformity can be defined as a change in a person's behaviour or opinions as a result of real or imagined pressure from a person or a group of people" (Aronson 2008 p234) Agreeing with the theme of a tribal human society Ridley writes: "... one way to understand ritual is as a means of reinforcing cultural conformity in a species dominated by groupishness and competition between groups. Humankind, I suggest, has always fragmented into hostile and competitive tribes, and those that found a way of drumming cultural conformity into skulls of their members tended to do better than those that did not." ...read more.

In a total of 12 trials, on 11 occasions the na�ve individual concurs with the rest of the group. Asch unearthed that 32 per cent was the overall figure of na�ve participants who agreed with the incorrect minority answer. When questioned, the na�ve individuals said they wanted to be liked by everyone and not outcast, not to upset the experimenter or appear different to the rest of the group, some even believed there eyesight genuinely got worse during the experiment. Asch had his critics: "These theories have no basis in fact; any facts about the mind used in their support would have necessitated the use of such theories. In effect, the psychological world so dear to the heart of many social psychologists is a social construction, and the findings used to justify statements about this world are only valid insofar as one remains within the theoretical (and metatheoretical) paradigms of the field. Research findings don't have any meaning until they are interpreted, and these interpretations are not demanded by the findings themselves. They result from a process of negotiating meaning within the community." (Gergen 1999 p123) According to Leyens & Cornielle (1999), the study took a more individualistic approach, and focused purely on the naive participant's independence, rather than the group's independence. Fiske (2004) agrees, Asch's research is "stripped down" social influence, without the everyday interactionist within a group environment. ...read more.

Individualist cultures correspond to defined personal choices and achievements. In hindsight collectivist cultures is defined by collective groups, such as religion, family etc. There is clear indication of a variation in all psychological studies, this could be due to the country, or area the individual, or groups of people originate from. This could influence the results of tests, but also could influence the person who is conducting the test on how it is formed, as some studies have shown. All experiments show there is a element of conformism, where swayed by the majority or the minority, different tests and assessments garner varying results. Cultural origin, impacts upon the psychological tests, and have been highlighted by several of the psychologist's experimental assessments including Asch, Spencer & Perrin, and also Bond & Smith. Given the modern times differing faculties to interact with each other, like the internet, mobile phone, gaming, there is a huge variation in ways to conform, and the more traditional approaches do not necessarily correspond to the world in the 21st century. An important social reformer and philosopher commented on conformity and summons up how fickle we the human animal can be: "Our wretched species is so made that those who walk on the well-trodden path always throw stones at those who are showing a new road" (Voltaire 2008 p216) Where are all the modern day social reformers, psychologists and philosophers today, can they conform to a globalised society. ...read more.