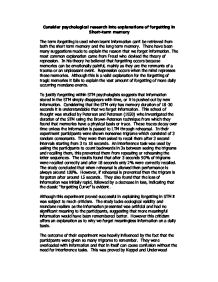 Consider psychological research into explanations of forgetting in Short-term memory

Consider psychological research into explanations of forgetting in Short-term memory The term forgetting is used when learnt information can't be retrieved from both the short term memory and the long term memory. There have been many suggestions made to explain the reason that we forget information. The most common explanation came from Freud who devised the theory of repression. In his theory he believed that forgetting occurs because memories can be emotionally painful, mainly as they are the remnants of a trauma or an unpleasant event. Repression occurs when the mind represses these memories. Although this is a valid explanation for the forgetting of tragic memories it fails to explain the vast amount of forgetting of more daily occurring mundane events. To justify forgetting within STM psychologists suggests that information stored in the STM simply disappears with time, or it is pushed out by new information. ...read more.

However, if rehearsal is prevented then the trigram is forgotten after around 15 seconds. They also found that the loss of information was initially rapid, followed by a decrease in loss, indicating that the classic "forgetting Curve" is evident. Although this experiment proved successful in explaining forgetting in STM it was subject to much criticism. The study lacks ecological validity and mundane realism as the information presented was artificial and had no significant meaning to the participants, suggesting that more meaningful information would have been remembered better. However this criticism offers an explanation as to why we forget meaningless information on a daily basis. The outcome of their experiment was heavily influenced by the fact that the participants were given so many trigrams to remember. They were overloaded with information and that in itself can cause confusion without the need for interference tasks. ...read more.

They were then probed at the end of the list with the digit and asked to state which digit followed it in the list. Lists were presented at 1 or 4 per second audit orally. The experimenters found that forgetting varied with the number of digits presented between the probe and the end of the list, but not with the time between the probe and the end of the list. This suggested, therefore, that forgetting was interference based rather than time based which further supports the works of Peterson and Peterson. They carried out a further experiment, this time the digits were presented at different speeds. It was found that recall improved when digits were presented faster, again suggesting that decay was to blame rather than displacement. Studies provide us with evidence that both the Trace Decay Theory and The Displacement Theory are explanations of forgetting within STM. However, the evidence would suggest that decay and interference play the bigger part in this process. ...read more.