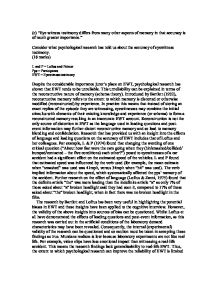 Consider what psychological research has told us about the accuracy of eyewitness testimony.

(c) "Eye witness testimony differs from many other aspects of memory in that accuracy is of much greater importance." Consider what psychological research has told us about the accuracy of eyewitness testimony. (18 marks) L and P = Loftus and Palmer Pps = Participants EWT = Eyewitness testimony Despite the considerable importance juror's place on EWT, psychological research has shown that EWT tends to be unreliable. This unreliability can be explained in terms of the reconstructive nature of memory (schema theory). Introduced by Bartlett (1932), reconstructive memory refers to the extent to which memory is distorted or otherwise modified (reconstructed) by experience. In practice this means that instead of storing an exact replica of the episode they are witnessing, eyewitnesses may combine the initial stimulus with elements of their existing knowledge and experience (or schema) ...read more.

L and P found that estimated speed was influenced by the verb used (for example, the mean estimate when "smashed" was used was 41mph, versus 34mph when "hit" was used). The verb implied information about the speed, which systematically affected the pps' memory of the accident. Further research on the effect of language (Loftus & Zanni, 1975) found that the definite article "the" was more leading than the indefinite article "a" as only 7% of those asked about "a" broken headlight said they had seen it, compared to 17% of those asked about "the" broken headlight, when in fact there was no broken headlight in the film. The research by Bartlett and Loftus has been very useful in highlighting the potential biases in EWT and these insights have been applied to the cognitive interview. ...read more.

If real-life EWT is more reliable than laboratory EWT this leads to two conclusions: the laboratory research lacks internal validity, or maybe some other factor like flashbulb memory accounts for the greater reliability of EWT. The extent to which EWT needs to be improved can also be questioned as real-life EWT has higher accuracy than the research would suggest (Christianson & Hubinette 1993). Loftus (1979) have found impressive accuracy in people's recall of the main events of a crime. Furthermore, research (Heath & Erickson, 1988) suggests that it is easier to distort minor details than key details. This raises further doubt as to how relevant the research is to real-life EWT, as the research tends to focus on insignificant details (e.g. red purse) that can be easily distorted whereas key details are less likely to be as easily distorted. ...read more.

The writer has covered this topic well and has cited many, varied, experiments which have been carried out on the subject of eye witness testimony. The writing could be improved if some of the experiments were explained more clearly and in more detail. It would also read better if the writing was more organised with an introduction, the main body of work and then a conclusion.