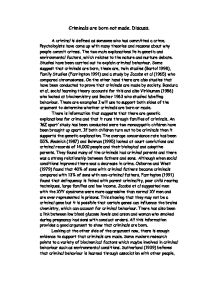 Criminals are born not made. Discuss.

Criminals are born not made. Discuss. A criminal is defined as someone who has committed a crime. Psychologists have come up with many theories and reasons about why people commit crimes. The two main explanations lie in genetic and environmental factors, which relates to the nature and nurture debate. Studies have been carried out to explain criminal behaviour. Some suggest that criminals are born, these are, twin studies (Bartol 1998), Family Studies (Farrington 1991) and a study by Jacobs et al (1965) who compared chromosomes. On the other hand there are also studies that have been conducted to prove that criminals are made by society. Bandura et al, social learning theory accounts for this and also Virkkumen (1986) who looked at biochemistry and Becker 1963 who studied labelling behaviour. These are examples I will use to support both sides of the argument to determine whether criminals are born or made. There is information that suggests that there are genetic explanations for crime and that it runs through families of criminals. ...read more.

There has also been a link between low blood glucose levels and arson and woman who smoked during pregnancy had sons with conduct orders. All this information provides a good argument to show that criminals are born. Looking at the other side of the argument now, there is enough evidence to support that criminals are made. Some modern research points to a variety of biochemical factors which maybe involved in criminal behaviour such as environmental conditions. Sutherland (1939) believes that criminal behaviour is learned through association with other people, especially close personal groups. The learning includes techniques to carry out certain crimes and attitudes and motives that deal with committing crime. He believes boys are more delinquent than girls because of the way they are brought up, being aggressive and risk seekers. Bandura et al (1963), social learning theory, says that behaviour can be learned through the observation of others, for example, in media such as film and television. ...read more.

When children are labelled, they can either fulfil this label or rebel against it, but in most cases if they are labelled a criminal that's how they will end up (Becker 1963). Farrington & West (1990) found a link between unemployment, poverty and crime; and the most persistent offenders had not had a stable job. Zimbardo looked at social roles in his prison simulation experiment and similar to this, men who believe in traditional male ideology of being strong are more likely to become criminals. Having collected information from both sides of this argument, I believe that criminals are both born and made, depending on the circumstances. There is evidence to suggest that crime runs through families and there is a majority of trends arising. On the other hand there are environmental factors aswell as genetic ones that add to this, like Farrington and Mednick point out. Farrington argued that many criminals had criminal parents, but the situation improved when social conditions did. Mednick also found an improvement in crime when social conditions got better. Therefore I think they both act on to each other in producing criminals. ...read more.