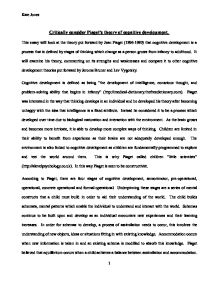 Critically consider Piaget's theory of cognitive development. This essay will look at the theory put forward by Jean Piaget (1896-1980) that cognitive development is a process that is defined by stages of thinking which change as a person grows from infancy to adulthood. It will examine his theory, commenting on its strengths and weaknesses and compare it to other cognitive development theories put forward by Jerome Bruner and Lev Vygotsky. Cognitive development is defined as being "the development of intelligence, conscious thought, and problem-solving ability that begins in infancy" (http://medical-dictionary.thefreedictionary.com). Piaget was interested in the way that thinking develops in an individual and he developed his theory after becoming unhappy with the idea that intelligence is a fixed attribute. Instead he considered it to be a process which developed over time due to biological maturation and interaction with the environment. As the brain grows and becomes more intricate, it is able to develop more complex ways of thinking. Children are limited in their ability to benefit from experience as their brains are not adequately developed enough. The environment is also linked to cognitive development as children are fundamentally programmed to explore and test the world around them. This is why Piaget called children "little scientists" (http://alevelpsychology.co.uk). In this way Piaget is seen to be constructivist. According to Piaget, there are four stages of cognitive development, sensorimotor, pre-operational, operational, concrete operational and formal operational. Underpinning these stages are a series of mental constructs that a child must build in order to aid their understanding of the world. ...read more.

Even though the children saw the same amounts of liquid in the original beakers, when the liquid was poured into the tall, thin beaker, pre-operational children said that this one contained more liquid despite agreeing that none had been taken out or spilt. More recent research has questioned Piaget's view of the conservation abilities of pre-operational children. McGarrigle et al (1974) repeated Piaget's conservation task with 6 year old children, using counters arranged in rows of equal numbers. When the researchers muddled up the counters only 16% of the children thought that the counters were the same. However when a "naughty teddy" muddled them up, 62% of children were able to give the correct answer (Hill, 2001, pp37). This seems to contradict Piaget by suggesting that children are better able to conserve than he thought if the situation is given a meaning that children understand. The Concrete Operational Stage takes place from 7 - 11 years old and is the third stage of Piaget's theory. This stage is characterised by the child being able to perform a number of more complex cognitive tasks, including classification, seriation, reversibility, decentration and conservation. Schemas during this stage now become logical and mathematical. By now children are less self-centred and have the ability to think logically but only in relation to objects that exist in reality. By mastering conservation a child is now able to accurately judge this type of task but still needs to be able to see the transformation taking place as they are still unable to process this information purely in their head (Cullis et al, 1999). ...read more.

Bruner also stressed the importance of cultural background as he maintained that culture determines the kind of person an individual will become. His view was that culture provides the directions to how a human should develop, clearly disagreeing with Piaget's view that a child learns on their own (http://www.psychology4a.com). Vygotsky was also a proponent of the importance of social interaction and language in cognitive development. In contrast to Piaget, who thought learning occurred on an individual level, Vygotsky maintained that cognitive development happened because of the social input that children receive from others (ibid). Vygotsky formulated the idea of "scaffolding", whereby adults provide a support system to help children understand and therefore are able to achieve higher levels of development. According to Vygotsky, because cognitive development is a combination of knowledge achieved between the child and society it is true to say that a child's intellectual potential is greater if they are working with support and input from adults than if they were working alone. This is called the "zone of proximal development" (Hill, 2001, pp 41). In conclusion, despite Piaget's theory receiving criticism for its apparent lack of emphasis on the social environment, the input of others and the role of language, it still is an important model of cognitive development which has widely influenced teaching practices and has been a starting point for other psychologists to develop their own ideas. Piaget saw children being central to their own learning and proposed that they be allowed to discover things for themselves which has been core to many student-centred learning strategies still used in the modern classroom. ...read more.