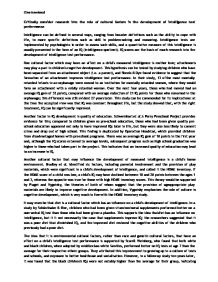 This indicates that an increased quality of education may lead to an increase in IQ. Another cultural factor that may influence the development of measured intelligence is a child's home environment. Bradley et al. Identified six factors, including parental involvement and the provision of play materials, which were significant in a child's development of intelligence, and called it the HOME inventory. If the HOME score of a child was low, a child's IQ may have declined between 10 and 20 points between the ages 1 and 3, whereas the opposite was true for those with high HOME inventory scores. This theory would be supported by Piaget and Vygotsky, the theories of both of whom suggest that the provision of age-appropriate play materials are likely to improve cognitive development. In addition, Vygotsky emphasises the role of culture in cognitive development, which is very much in line with the HOME inventory study. It may even be that diet is a cultural factor which has an influence on a child's development of intelligence. In a study by Sch�nthaler & Bier, children who had been given vitamin-mineral supplements performed better on a non-verbal IQ test than those who had been given a placebo. ...read more.

However, this does not necessarily indicate that it is a genetic cause, since skin colour and intelligence are believed to have very different genetic structures. It may be in indirect genetic influence, in that black children raised in a white home have lower self-expectation, or that they socialise with other black children at school (which may have more of an influence than their white, middle-class home). IQ tests have, however, been heavily criticised for lacking reliability, as an IQ result from one test can vary dramatically with an IQ result from another. Additionally, they have been criticised for being culturally biased; there are many different types of thought (e.g. language, problem-solving, pattern recognition, reasoning), and some types of thought are more valued in some cultures than in others. This may extend to sub-cultural differences between people of different socioeconomic status. For example, it has often been found that black American children perform less well on IQ tests than white children, however, Serpell (1979) found that white children performed significantly less well than black children on an IQ test aimed at black Americans. This brings into question the use of IQ tests as a valid method of measuring intelligence. Clive Newstead ...read more.

The writer has included quite a few studies in this essay, although some of them have not been referenced properly. However, some more important studies have been left out, eg. twin studies. In order to improve the score the essay should have been written from a well organised plan. For example, cultural factors needed to be explained first, before going on to cite various studies. It is not clear from the writing which cultural factors the writer is discussing. Then the writer needs to choose which studies are more relevant in order to meet the essay requirements.