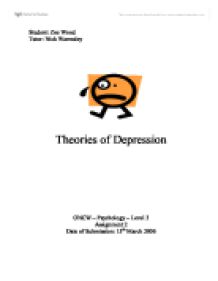 Student: Zoe Wood Tutor: Nick Warmsley Theories of Depression ONCW - Psychology - Level 3 Assignment 2 Date of Submission: 15th March 2006 Critically Discuss the Causes of one Psychological Disorder Depression is one of the most common and treatable of all mental illnesses. The term 'depression' can be confusing and often referred to describe normal emotional reactions; however it is a widely studied psychological disorder that many people can suffer from. 340 million people in the world suffer from this mental disorder, which no one is immune to. It can happen to anybody from any social class, from any country, of any race. Everybody can feel 'down in the dumps' at times. These feelings of sadness and discouragement are perfectly normal especially during hard times, but a person who constantly feels like this and cannot 'snap out of it' may be a sufferer of this illness. Depression can take several other forms. In bipolar disorder, known as manic-depressive illness, a person's mood swings back and fourth between depression and mania. People with seasonal effective disorder, suffer from depression normally during the autumn and winter when there are fewer hours of daylight. ...read more.

Hendler & Prescott (1999) conducted the same study using 3790 twin pairs and found a heritability factor of 39% with the remaining 61% down to environmental factors. Unlike Bierut et al he found no difference between males and females. It should be noted, however, that there have been criticisms of the underlying assumptions of twin studies. One of the most common criticisms is what effects the environment has on the study. Twins usually share the same environment as they develop through time, but the factor is dismissed as a component. Reiss and Neiderhiser (2000) suggested that "it needs to be subjected to continuing criticisms as we learn more about the nuances of sibling relationship and how they evolve overtime. It may well be that subtle differences in the social worlds of identical twins in comparison to fraternal twins are still masquerading as genetic influence" They do not suggest ignoring the studies altogether but suggest integration with observations about the social environment in developmental theories. Some psychologists thought that research from twin studies were limited due to the fact stated that they usually shared the same environments. ...read more.

Parker et al (1998) devised a 'lock and key' hypothesis to establish the way depression is triggered off. Early adverse experiences, such as parents dying and being taken into care, which is the lock, is triggered off by later experiences, such as loss of your job, which is the key. They interviewed 270 severely disturbed patients and found that the 'lock and key' hypothesis in one third of the cases. This, again like the other theories, show that there are only a small number of people, from the sample used that have the 'lock and key' hypothesis, meaning the hypothesis is not a strong factor that causes depression. It is clear form all the studies undertaken that there is no black and white answer to reveal how and why people suffer from depression. In reviewing a multitude of twins, adoption and family studies, it is clear to see that the foundation for each human is diverse in structure. For some cases genetics seems dominant, in some environment explains all, and in others it is the two factors combined together making people who and what they are. This is a strong indicator that the causes of depression will never be put down to one factor and the reason will have to be rationalised on a case by case basis. ...read more.