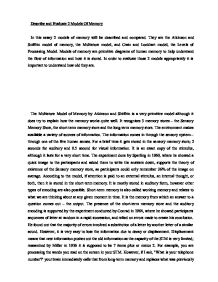 Describe and Evaluate 2 Models Of Memory

Describe and Evaluate 2 Models Of Memory In this essay 2 models of memory will be described and compared. They are the Atkinson and Sniffrin model of memory, the Multistore model, and Crain and Lockhart model, the Levels of Processing Model. Models of memory are primitive diagrams of human memory to help understand the flow of information and how it is stored. In order to evaluate those 2 models appropriately it is important to understand how old they are. The Multistore Model of Memory by Atkinson and Shiffrin is a very primitive model although it does try to explain how the memory works quite well. It recognises 3 memory stores - the Sensory Memory Store, the short-term memory store and the long-term memory store. The environment makes available a variety of sources of information. The information comes in through the sensory system - through one of the five human senses. For a brief time it gets stored in the sensory memory store; 2 seconds for auditory and 0.5 second for visual information. It is an exact copy of the stimulus, although it lasts for a very short time. The experiment done by Sperling in 1960, where he showed a quick image to the participants and asked them to write the answers down, supports the theory of existence of the Sensory memory store, as participants could only remember 36% of the image on average. ...read more.

He could remember anything he had learnt prior to surgery but no more information could be transferred to LTM. This supports the idea that in there is 2 memory stores, and the link between them can be damaged, which shows that in order to get to LTM, the information has to go through STM. However, in 1970, reported a patient, known as KF, who suffered brain damage, which impaired his STM but left his LTM intact. In terms of the multimodel it cannot happen, as it suggests that all information has to go through STM in order to reach LTM. Also, further inverstigation revealed that KF's STM impairment was mainly for verbal material as his memory for visual and meaningful material was largery unnafected. This suggests the possibility of more than one STM store, which is also supported by the critisism of Tuluing in 1972, who suggested that there are actually 2 separate LTM stores - the semantic and episodic memory. This is possible, as there were cases of brain damaged people, who could remember the factual knowledge, such as common sense knowledge, before their brain damage, but could not remember who they were. Squire also suggested a procedural memory, which involves skills and motor abilities. The model looks too simplistic and rigid as human brain is a very complicated structure. For example it suggests that rehearsal is the only way to transfer information to LTM. ...read more.

The evidence only relates to learning and recognising words. Baddaley, in 1978, critised the model and said that the theory is difficult to test as there is no objective way of measuring depth of processing. Parin, in 1993, also said about the experiment conducted by Crain and Lockhart, that in some cases, participants did not have to read the word to be able to answer the question, so the test was very unfair. It is not very easy to compare the 2 modesl. They are very different in their styles but they do try and show similar patterns. They both show that some kind of attention needs to be paid to information, in order to transfer it to STM and LTM. However, the multistore memory shows that in order for the information to get transferred to LTM, it has to be rehearsed, whereas the Levels of Processing model shows that it is enoungh for the input to trigger some kind of association on semantic level for it to be transferred to LTM. The Levels of Processing does not show any Memory Stores or where the memory is stored, so it is quite limited, whereas the other model does show 3 memory stores. The levels of processing model is very limited as it does not show where information is stored and how it is forgotten. I think the multistore model, although very simplistic does give a better understanding about the human memory that the other one. It is a very good model for the time it was made and it is based on reliable evidence. ...read more.

This is quite a complex subject to cover without getting bogged down in technical terms. However, the writer has managed to discuss and critique the two models well. Various studies and experiments have been quoted to back the different models. An even higher score could be expected if the writer went into a little more detail with regards the experiments. Also, the conclusion could be improved upon. Personal opinions should not be given and the conclusions should be evidence based. Overall the essay is detailed and it is in the writer's own words.