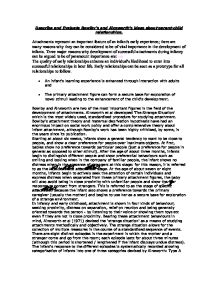 Describe and Evaluate Bowlby's and Ainsworth's ideas about parent-child relationships.

Describe and Evaluate Bowlby's and Ainsworth's ideas about parent-child relationships. Attachments represent an important feature of an infant's early experience; there are many reasons why they can be considered to be of vital importance in the development of infants. Three major reasons why development of successful attachments during infancy can be argued to be of paramount importance are: This The quality of early relationships enhance an individual's likelihood to enter into successful relationships in later life. Early relationships can be seen as a prototype for all relationships to follow. * An infant's learning experience is enhanced through interaction with adults and * The primary attachment figure can form a secure base for exploration of novel stimuli leading to the enhancement of the child's development. Bowlby and Ainsworth are two of the most important figures in the field of the development of attachments. Ainsworth et al developed 'The Strange Situation' which is the most widely used, standardised procedure for studying attachment. Bowlby's attachment theory and maternal deprivation hypothesis have had an enormous impact on social work policy and offer a comprehensive theory about infant attachment, although Bowlby's work has been highly criticised, by some, in the years since its publication. Starting at about six weeks, infants show a general tendency to want to be close to people, and show a clear preference for people over inanimate objects. At first, babies show no preference towards particular people (just a preference for people in general as opposed to other stimuli). After the age of about three months, infants begin to distinguish different people and show preferential behaviours such as smiling and looking when in the company of familiar people, the infant shows no distress when in the presence of strangers at this stage: for this reason, it is referred to as the indiscriminate attachment stage. ...read more.

Lamb et al considered Ainsworth's 'strange situation' to be '... the most powerful and useful procedure ever available for the study of socioemotional development in infancy.' Ainsworth's A, B and C Type classifications are widely regarded as reliable and stable and have consequently been used in a wide variety of studies about attachment in the years proceeding Ainsworth's original development of the 'strange situation'. There are some criticisms of the 'strange situation' largely concerning its low ecological validity: Lamb suggests that the main problems with the experiment are that it is extremely artificial and fails to take the mother's behaviour into account. Main et al (1985) suggested a fourth classification (Type D - insecure/disorganised infants) after finding that 13% of infants tested did not conform to either the A, B or C classifications set out by Ainsworth. Main's Type D infants displayed a diverse array of disorganised and disordered behaviour and failed to display a clear-cut strategy for dealing with stressful situations. Cross-cultural studies are helpful in determining universal traits and can also point to any culture specific aspects of testing situations thus providing useful evaluative material. 32 worldwide studies using the 'strange situation' with over 2000 infants carried out by Van Ijzendoom & Kroonenberg (1985) came up with three major conclusions: firstly there are marked intra-cultural differences in distribution of the attachment Types A, B and C. Secondly, the overall distribution of attachment types was very close to Ainsworth's standard (Type B 70%, Types A and B approximately 15% each), but even within the US there was a high variability between samples. Van Ijzendoom & Kroonenberg found a strong pattern of cross-cultural differences whereby Type B infants are universally the most common whereas Type A babies are more common than Type A in Western Europe and Type ...read more.

Alternatively it is possible that that lack of social stimulation could have an indirect influence on intellectual development for instance, depression resulting from emotional deprivation could lead to poor intellectual progress. Evidence provided by Rutter suggests that infants institutionalised early are more likely to show subsequent personality problems that those institutionalised late and implying that that long-term problems are the result of failure to form an attachment rather than being due to subsequent attachment disruption. There appear to be long-term effects of early life experiences but problems appear to arise primarily as a result of a loss rather than a lack of normal family experience. Bowlby's emphasis of the mother's role in deprivation is perhaps a little extreme; problems of deprivation could be viewed as a result of social deprivation as a whole rather than as a direct result of separation from the mother. Bowlby's work shows the importance of the formation of secure attachments during the early stages of infancy whilst Ainsworth's 'strange situation' allows an objective measure to be made of attachment types. This enables us to attempt to determine the factors which contribute to successful attachment formation, which can be argued to be paramount with regards to intellectual, social and emotional success later in life. Both Ainsworth and Bowlby have their critics but are widely regarded to be the leading names in their field; the sheer number of replications of Ainsworth's experiment speaks volumes about the confidence that other psychologists have in her procedures whilst Bowlby's theory of attachment could be argued to be in need of revision, but on the other hand, Bowlby's work, commissioned by the World Health Organisation, had an enormous impact in the history of social reform. Bowlby's work has had an enormous impact on social work policy, legislation relating to children, psychology and psychiatry. ...read more.