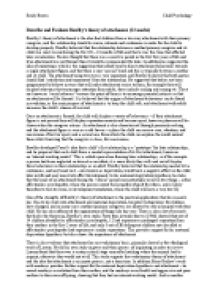 ﻿Emily Brown Child Psychology Describe and Evaluate Bowlby?s theory of attachment. (12 marks) Bowlby?s theory of attachment is the idea that children form a two way attachment with their primary caregiver, and this relationship should be warm, intimate and continuous in order for the child to develop properly. Bowlby believed that the relationship between a mother/primary caregiver and its child was most crucial during the first 18 ? 24 months of life and that is was this time that affected later socialisation. He also thought that there was a sensitive period in the first few years of life and if an attachment was not formed then it would be compensated for later. In addition he suggested the idea of monotropy, which is the suggestion that infants tend to direct attachment behaviours towards a single attachment figure, and that there is one ?special? bond and this is typically between a mother and its child. The attachment being two way is very important, and Bowlby believed that both parties should find ?satisfaction and enjoyment? from the relationship. He suggested that babies are born programmed to behave in ways that will make attachments easier to form, for example they will display behaviour that encourages attention from adults, these include smiling and cooing etc. ...read more.

empathy of guilt for others, and is likely therefore to turn to crime, or development retardation, where the child will have a very low IQ. One of the strengths of Bowlby?s theory of attachment is the practical applications that his research has. Due to his work into attachment and maternal deprivation, hospital visiting hours for children have changed, and in many cases mothers/primary caregivers are allowed to stay in hospital with their child. He has also influenced the organisation of things like day care. There is also a lot of research that backs the theory up, Bowlby?s own study, Forty four juvenile thieves (1946) showed that out of 14 children identified as affectionless psychopaths, 12 had experiences prolonged separation from their mothers in the first 2 years of life, and only 5 out of 30 delinquent children not classified as affectionless psychopaths had experiences similar separations. This provides support for his maternal deprivation hypothesis but also shows the importance of attachment. There is also evidence that attachment has an evolutionary basis, primarily shown by the ethological work of Lorenz. He did his own study in geese and their process of imprinting in order to survive. ...read more.

His theories were used as a tool to make more women stay at home to care for their children, however this brings up the debate of which is worse for a child ? having a stay at home mother but living in poverty or having a mother absent but bringing in money. Both poverty and deprivation have negative effects of children?s development. Bowlby has also been criticised for his idea that attachment to a single care-giver is important due to the fact that most children have multiple attachments to other ?secondary? care-givers, such as the father, grandparents, and nursery teachers etc. Bowlby is also criticised for not distinguishing between privation and deprivation, and that the more extreme psychological damage (such as affectionless psychopathy and developmental retardation that he suggested) may be caused more by privation than deprivation. Overall, largely Bowlby?s theory is thought to be credible ? there is a lot of experimental evidence to back the theory up and it is believable that a child?s first and most important attachment is its mother, however it is likely that he overstated the importance of early relations with the primary caregiver, and it is generally thought that children are more resilient to early experiences than he gave them credit for, and Bowlby did later acknowledge this. ...read more.

This work covers the gist of Bowlby's work on attachments. After a good opening paragraph with a succinct outline of attachment theory, the rest of the work becomes rather disjointed. The writer needs to think more about the planning of the piece of work e.g. the introduction, the main body of the work (what to include and in what order), and a longer conclusion than at present. There are some missing references and 'separation and loss' could have been covered in more detail.
Overall score - 3