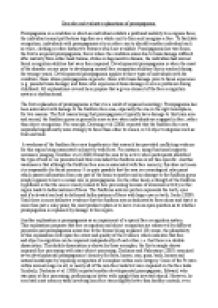 Describe and evaluate explanations for prosopagnosia

Another explanation is prosopagnosia as an impairment of a special face recognition system. This explanation proposes that face recognition and object recognition are subserved by different processes and prosopagnosia arises due to the former being impaired. Of course, the plausibility of this explanation rests upon the extent and quality of the evidence which indicates that face and object recognition can be impaired independently of each other, i.e. that there is a double dissociation. This double dissociation is shown by these examples, the first example shows impaired face processing with intact object processing; Duchaine and Nakayama (2005) examined seven developmental prosopagnosics' memory for faces, horses, cars, guns, tools, houses and natural landscapes by requiring recognition of exemplars within each category. Some of the Ps were within normal range on all, or nearly all of the non-face tasks but were impaired on the face tasks. Similarly, Duchaine et al. (2006) reported another developmental prosopagnosic, Edward, who was poor at face processing, performing no better with upright than inverted stimuli. However, he executed most memory tasks involving non-face items slightly better than healthy controls, even when he was required to recognise within-category exemplars. ...read more.

Of course, faces possess a particular configuration and as LH could deal with that kind of processing, it can be assumed his prosopagnosia was more associative in nature, he experienced difficulty in accessing stored knowledge about a face. DeRenzi et al. (1991) reported two patients GD and VA from whom they argued for a separation between a primarily perceptual prosopagnosia and an associative form of the disorder. GD performed much more poorly on perceptual tests than those involving memory for famous faces. VA on the other hand, had the reverse deficit, performing more poorly on famous face than perceptual tasks. VA's case can be explained similarly to LH: perceptual processing was comparatively intact, so VA's difficulty with faces cannot be ascribed to perceptual issues and thus can be accounted for in terms of an associative deficit. With GD, however, there is a perceptual problem which means perceptual difficulties may underlie the facial deficit. A weakness of DeRenzi et al.'s results is that they do not show a classic double dissociation (Shallice 1988) and instead form a relative dissociation in that the patients were deficient on both tasks, hence the evidence for the two different types of prosopagnosia could be artefactual: uncontrolled differences between the patients may be responsible for their differential impairment rather than real, qualitative differences in cognitive deficit (Parkin, 2002). ...read more.