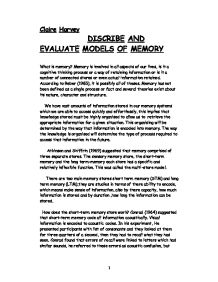 Describe and evaluate models of memory.

Claire Harvey DISCRIBE AND EVALUATE MODELS OF MEMORY What is memory? Memory is involved in all aspects of our lives, is it a cognitive thinking process or a way of retaining information or is it a number of connected stores or even actual information retained. According to Reber (1985), it is possibly all of theses. Memory has not been defined as a single process or fact and several theories exist about its nature, character and structure. We have vast amounts of information stored in our memory systems which we are able to access quickly and effortlessly, this implies that knowledge stored must be highly organised to allow us to retrieve the appropriate information for a given situation. This organising will be determined by the way that information is encoded into memory. The way the knowledge is organised will determine the type of process required to access that information in the future. Atkinson and Shiffrin (1969) suggested that memory comprised of three separate stores. The sensory memory store, the short-term memory and the long term-memory each store has a specific and relatively inflexible function. This was called the multi-store model. There are two main memory stores short term memory (STM) ...read more.

Long-term memory is studied in the same way as short-term memory.Encoding, capacity and duration. Two types of encoding are thought to operate in long-term, declarative memory and procedural memory. Declarative memories evolves semantic memory, this is memory for meaning, and episodic memory, this concerns knowing when, where and what. It is linked to personal experiences. Procedural memory, is memories of how to do things, this is often automatic and is resistant to forgetting. Baddeley(1966)researched semantic encoding by presenting participants with four list to remember, list 1 contained similar sounding words and list 2 had now words of the same sounds, list 4 contained words with similar meaning and list 3 had no relevance to each other. They were then asked to recall as many words as possible immediately after and then again after 20 minutes.Baddeley found that immediate recall was better for list 2 than for list 1 and there was little difference between list 3 and 4. After 20 minutes he found they recalled list 4 better than list 3 and there was no difference between list 1 and list 2.This experiment showed that long-term memory tends to store information accounting to semantics rather then simply sound.Baddeley also used a laboratory experiment and can therefore be criticised in terms of ecological validity, although it has good reliability. ...read more.

It showed that encoding was not at all simple. This helped to widen the focus on seeing the ltm as just a simple storage unit to seeing it as a complex processing system. Craik and Lockhart's ideas led to lots of experiments, most of which confirmed the ideas of the deep semantic processing systems and led to lots of supporting evidence. Research today agrees that STM is made up of a number of subsystems; the working memory model explains a lot more than the multi-store. In conclusion all the research that has been carried out does not prove precisely how memory works.Reber (1985) according to the experiments shown is right. Memory is all three of these, a cognitive thinking process, a way of retaining information and actual information retained. Psychologists have put a lot of time into figuring out the mysteries of memory. It is a very complex subject and I am sure they will be researching it for years to come. Each individual person uses memory in a different way. Think of memory as a computer, the short-term memory is the ram and the long-term memory as the hard drive. As I have already said the brains ability is more powerful than the world's largest computer, more than anyone can imagine, I don't think we will ever really know all of its capabilities. 1 ...read more.