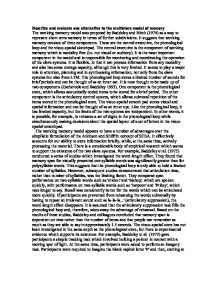 Describe and evaluate one alternative to the multistore model of memory

Describe and evaluate one alternative to the multistore model of memory The working memory model was proposed by Baddeley and Hitch (1974) as a way to represent short-term memory in terms of further subdivisions. It suggests that working memory consists of three components. These are the central executive, the phonological loop and the visuo-spatial sketchpad. The central executive is the component of working memory which is modality free (i.e. not visual or auditory). It is the most important component in the model and is responsible for monitoring and coordinating the operation of the slave systems. It is flexible, in that it can process information from any modality and also has some storage capacity, although this is very limited. It seems to play a major role in attention, planning and in synthesising information, not only from the slave systems but also from LTM. The phonological loop stores a limited number of sounds for brief periods and can be thought of as an inner ear. ...read more.

For example, Baddeley et al. (1975) conducted a series of studies which investigated the word-length effect. They found that memory span for visually presented one syllable words was significantly greater than for polysyllabic words. This suggests that the phonological loop is only able to hold a limited number of syllables. However, subsequent studies demonstrated that articulation time, rather than number of syllables, was the limiting factor. They compared span performance on two-syllable words such as 'cricket' and 'bishop', which are spoken quickly, with performance on two-syllable words such as 'harpoon' and 'Friday', which take longer to say. Recall was consistently better for the words which can be articulated more quickly. If participants are prevented from rehearsing the words subvocally by having to repeat an irrelevant sound such as la-la-la...' (articulatory suppression), the word-length effect disappears. It is assumed that the articulatory suppression task fills the phonological loop and, therefore, takes away the advantage of rehearsal. Based on the results of these studies, Baddeley and colleagues concluded that memory span is dependent on time rather than the number of items and that people can remember as much as they are able to say in approximately 1.5 seconds. ...read more.

This model has proved influential and is still being developed and expanded. The main weakness, however, is that the component we know least about (the central executive) is the most important. It has a limited capacity, but no one has been able to quantify it experimentally. Richardson (1984) argues that there are problems in specifying the precise functioning of the central executive. He believes that the terminology is vague and can be used to explain any kind of results. In other words, it can give rise to a circular argument, i.e. if we give participants an articulatory suppression task and this affects performance, we assume the phonological loop is normally utilised in the task, but if performance is not affected, we assume the central executive is normally utilised in the task. Hence, it is difficult to falsify the model. My view is that we cannot falsify this model since the model is still being expanded and inaccurate ideas can be amended in the process, meanwhile, it can still be thought of as a basis for further investigation. ...read more.

The writer has written a concise essay about the 'working memory model'. The essay included some of the main studies which have been carried out in this field, but would receive a higher score if they included some more up to date research. The writer needs to make sure that the essay is well constructed with a clear introduction and conclusion.They must also use their own words throughout.