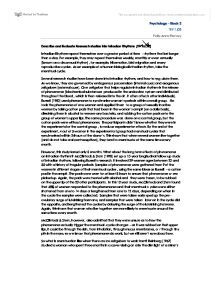 Describe and Evaluate Research studies into Infradian Rhythms (24 marks) Infradian Rhythms repeat themselves over a greater period of time - rhythms that last longer than a day. For example, they may repeat themselves weekly, monthly or even annually (known as a circannual rhythm), for example, hibernation, bird migration and many reproductive cycles. As an example of a human biological Infradian rhythm, take the menstrual cycle. Several research studies have been done into Infradian rhythms, and how to regulate them. As we know, they are governed by endogenous pacemakers (internal cues) and exogenous zeitgebers (external cues). One zeitgeber that helps regulate Infradian rhythms is the release of pheromones (biochemical substances produced in the endocrine system and distributed throughout the blood, which is then released into the air. It often affects other individuals). Russell (1980) used pheromones to synchronise women's periods within a small group. He took the pheromones of one woman and applied them to a group of s******y inactive women by taking cotton pads that had been in the woman's armpit (on a daily basis), dissolving them in alcohol to remove any bacteria, and rubbing the cotton pads onto the group of women's upper lips. ...read more.

Again, this shows that women who live together are more likely to menstruate around the same time every month. McClintock & Stern, however, also admitted that they were unsure as to how the pheromones actually trigger the menstrual-cycle changes - as it was rubbed on their upper lips, it could be through the skin, from inhalation, through mucus membranes, or through tiny pits in the nose, so we know that pheromones do work, but we still aren't sure about how. So what is menstruation like when there are no zeitgebers to work from? Reinberg (1967) studied a woman who spent three months in a cave relying on only the dim light of a miner's lamp. Her day lengthened to 24.6 hours but her menstrual cycle shortened to 25.7 days. Back in the regular world following this study, it was a year before her menstrual cycle returned to normal. According to Reinberg, the level of light in the cave was what had influenced the menstrual cycle. He also found that with 600 girls from northern Germany, the onset of menstruation which occurs at puberty ("menarche") ...read more.

Empson (1977) studied 21 male participants - their body temperatures and their moods were recorded over periods varying from 49-102 days. The study found evidence that there are variations of body temperature and their own ratings of "morning alertness", with a peak at around every 20 days. However, results such as these are difficult to generalise, for example, the Inuit Eskimos and their Infradian rhythms. Seeing as during the winter, there is no sunlight at all, and while this is going on, menstruation stops, we can see a link between sunlight and melatonin: when it is permanently dark, melatonin levels are permanently high and this has an effect on the menstrual cycle, causing it to stop until those levels drop again. As most of the studies are done in laboratories, we can say that most of the factors were very controlled and that any extraneous factors were non-existent - however this also means that the experiments were very unlike real life (for example, rubbing pheromones on one's upper lip) and therefore it is difficult to generalise these results to real life - the results may not have shown such a strong result if it were done, instead, as a field study. ?? ?? ?? ?? Psychology - Block 3 19/11/08 Polly-Anna Piercey ...read more.

This essay includes quite a lot of information and includes some of the relevant studies. It could be improved by making a better plan before writing which includes a good introduction and conclusion. Also some of the terms used need explaining in more detail so it is clear that the writer understands what these terms mean.