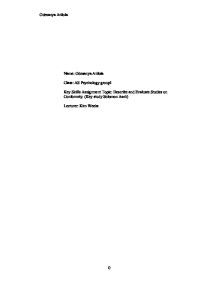 Name: Odesanya Atilola Class: AS Psychology group1 Key Skills Assignment Topic: Describe and Evaluate Studies on Conformity. (Key study Solomon Asch) Lecturer: Kim Weeks Conformity is defined as a change in a person's opinion or behaviour as a result of real or imagined pressure from a group of people. This pressure to act like other people sometimes, despite our true feelings and desires, is common in our everyday lives. This is due to implied and spoken rules of the situation. People conform due to two different reasons. People conform either by informational influence or normative influence. Deutsch and Gerard (1955) gave a definition on informational and normative social influence: Informational social influence is a situation whereby the individual has a desire to be right in the knowledge and judgement of others, shown in Sherif's study. People change their opinion because of a number of different reasons including status and roles and familiarity. ...read more.

Other result also states that 75% of the na�ve participant conformed at least once while 25% never conformed. Conclusion: Asch concluded that a majority could have influence on the individual. However after interviewing the participant, Asch concluded that people conform for different reasons. Some because of normative influence whereas others began to doubt their own perception and changed their own answer thereby exhibiting informational influence. EVALUATION Unlike Sherif who gave us no clear measure on how people conform, Asch did. Asch gave an exact measure on how people conform in certain situations be it under pressure or fear of rejection. One of the main criticisms of Asch's studies was that the participants were conforming because they were reluctant or embarrassed to expose their private views in a face-to-face situation. Consequently, the level of conformity should decrease if they are allowed to write their answers down where there is no face-to-face contact between group members. ...read more.

Thus, we can't generalize how people would behave in real life since they are not acting naturally. It has also been identified that people find it difficult to act naturally in an experiment. Also, the research is cultural bias. Cultural bias in the sense that the result Asch found on conformity cannot be generalized to other races. However, the research had a lot of ethical issues involves as the participants were not briefed at all. They had little or no information, which should not be so. Do psychologists tend to bother what happens after the research has been carried out on the na�ve participant? Some of the naive participant reported feeling quite stressed on the critical trials, which had a psychological harm on them. Asch also deceived them regarding the experiment true purpose which then pops the question "Do psychologist use deception to have their researches carried out?" or should I say, "Are they justified?" Above all, as an upcoming psychologist, this research has further broadened my knowledge on how indidividuals react in certain situation and has taking me one-step closer in understanding the world. ...read more.

This is a very good essay that goes to explicit depth when talking about conformity, it's presence in social situations, and how it affects our behaviour. They also take the time to differentiate between informative social influence and normative social ...

This is a very good essay that goes to explicit depth when talking about conformity, it's presence in social situations, and how it affects our behaviour. They also take the time to differentiate between informative social influence and normative social influence. Here though, the informative social influence definition is a little ambiguous and could confuse non-psychology students, so I'd recommend taking a look at that and ensuring that you make it clear that the conformity is a result of information given to you by others. Elsewhere, I like the use of studies as a way of validating the evaluation, and also the clear instructions as to how Asch conducted his study (the candidate could be even clearer about the actual procedure though, and what was shown on the cards e.g. Line A, B, C and X). There is a good discussion about the strengths and weaknesses of Asch's study, creating a balanced analysis to aid the candidate to answering the question.

The Level of Analysis is typically prescriptive of a Psychology answer, but this candidate does offer a very good analysis of studies into conformity, primarily citing Asch with a good level of detail. The candidate provides an array of strengths and weaknesses pertaining to he study and links them back to how valid it makes the results about conformity. The extra marks that so many candidates miss is in that last point - linking the strength/weakness back to the focus of the question. There is usually a mark for identifying an evaluation point; saying why it is a strength/weakness to the study in question; and then linking back to how this affects the validity of the behaviour being questioned.

The Quality of Written Communication is very good. From both a Psychology perspective and an English perspective the candidate uses language confidently and fluidly. There is no cause for concern with regards to abiding by the rules of Standard English as the candidate's grammar, spelling and punctuation are all accurate, and the use of complex psychological terminology applied appropriately indicates a candidate who writes with flair and knowledge about the language of Psychology.