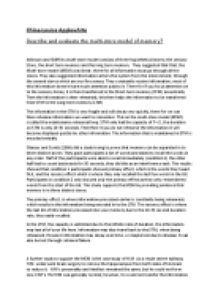 Describe and Evaluate the Multi-store model of Memory.

﻿Chloe-Louise Applewhite Describe and evaluate the multi-store model of memory? Atkinson and Shiffrins multi-store model consists of three hypothetical stores; the sensory Store, the short term memory and the long term memory. They suggested that that, the Multi-store model (MSM) was linear, there for all information must go through all the stores. They also suggested information enters the system from the environment, through the several stores which are our five senses. They constantly receive information; most of this information doesn?t have much attention paid to it. There for if you focus attention on to the sensory stores; it is then transferred to the Short-term memory (STM) acoustically. Then the Information is then rehearsed; this then helps the information to be transferred from STM to the Long-term memory (LTM) ...read more.

The results showed that condition 1 participants showed primacy effect, which is the words they heard first, and the recency effect which is where they only recalled the last few words in the list. Participants in condition 2 only showed only the primacy effect as they only remembered words from the start of the list. This study supports the MSM by providing evidence that memory is in three distinct stores. The primacy effect, is where information processed earlier is constantly being rehearsed, which results in the information being encoded in to the LTM. The recency effect is where the last bit of information processed into your memory due to the 18-30 second duration rate, thus easily recalled. In the LTM, the capacity is unlimited due to the infinite rate of duration, the information may last all of your life here. ...read more.

However the study was very high in ecological validity as it was a real life situation. Despite giving evidence that there are separate stores of memory, the H.M study cannot be used to explain why his LTM was intact, whereas H.M?s STM was damaged as the MSM suggests that all information must pass through the STM to reach the LTM, hence the referral to it being a linear model. The MSM is also criticised for being oversimplified compared to other models, such as the working memory model, which study suggest STM is three different stores. It?s oversimplified because, it focusses mainly on structure, and too little on the processes of memory. It also uses a lot of lap experiments, there for you are more likely to have demand characteristics. Lastly the LTM may help us interpret information in our STM, but in the MSM, there is no such suggestion or enough emphasis on the short term, or long term components. ...read more.