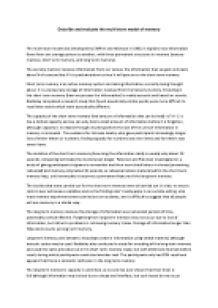 Describe and evaluate the multi store model of memory

Items in the long term memory have a longer duration if originally well learned and certain forms of information have a longer duration like information based on skills rather than just facts. The three areas of the long term memory show that it is difficult to see how smells and tastes could be encoded semantically and reason suggests that songs must be encoded acoustically, supporting the idea of several forms of encoding in the long term memory. Also diary studies which are used in capacity studies are a type of case study and therefore are not representative of the general population. There is strong evidence to support the components of the multi-store model and it provides an account of memory in terms of both structure and process. The structures are the three stores and the processes are attentio0n and verbal rehearsal. However it is reductionist (oversimplifies memory structures and processes). And has been criticised for focusing too much on structure and too little on process. ...read more.