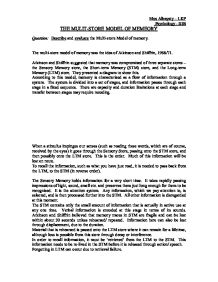 Describe and evaluate the Multi-store Model of memory.

Mos Albayaty - LKP Psychology - IGB THE MULIT-STORE MODEL OF MEMEORY Question: Describe and evaluate the Multi-store Model of memory. The multi-store model of memory was the idea of Atkinson and Shiffrin, 1968/71. Atkinson and Shiffrin suggested that memory was compromised of three separate stores - the Sensory Memory store, the Short-term Memory (STM) store, and the Long-term Memory (LTM) store. They presented a diagram to show this. According to this model, memory is characterised as a flow of information through a system. The system is divided into a set of stages, and information passes through each stage in a fixed sequence. There are capacity and duration limitations at each stage and transfer between stages may require recoding. When a stimulus impinges our senses (such as reading these words, which are of course, received by the eyes) it goes through the Sensory Store, passing onto the STM store, and then possibly onto the LTM store. This is the order. Much of this information will be lost en route. To recall the information, such as what you have just read, it is needed to pass back from the LTM, to the STM (in reverse order). The Sensory Memory holds information for a very short time. ...read more.

Their suggestion that rehearsal is the only means of transfer from STM to LTM has also been criticised. Similarly, another model - the Working Memory Model of Baddeley and Hitch, 1974, casts doubt on Atkinson and Shiffrin's model. Rather than the STM being a simple inflexible store, as Atkinson and Shiffrin's theory showed, Baddeley and Hitch suggested that the STM was made up of several subsystems, each having a specialised function. They suggested that these subsystems were involved in complex thought processes, including analysis and judgements about information input. Baddeley and Hitch's working memory model was made up of three separate sections, the Central Executive, the Phonological Loop, and the Visuo-spatial Scratch Pad. The central executive is the most important component in the model and is responsible for conscious thought, planning and decision making. It is the active site of thinking and is virtually the same as attention since it holds and manipulated everything to which we are paying attention at any one time. It is flexible in that it can process information from any modality and has very limited capacity, since you know that it is not possible to carry out very many conscious activities at once. For example, if your friend comes and asks you a question while you are deciding on an outfit, you will stop thinking about it while you listen and respond. ...read more.

The model is descriptive rather than explanatory - t simply says that deeper processing leads to better recall but does not explain why this should be. The sectionalised model of Long Term Memory (LTM) was the theory of Tulving, 1985. This model is divided into two sections. The first section is 'Procedural Memory'. This is the kind of knowledge acquired only through doing. For example, these involve such abilities as how to ride a bike, or knit a sweater. This type of LTM is the type in which you do something once, and will never forget it; it becomes proceduralised. The second section is 'Declarative Memory'. Declarative Memory is sub-divided into 'Semantic Memory' and 'Episodic Memory'. Semantic memory contains information about our knowledge of the world. For example, facts, rules, concepts and language. Episodic memory contains the memories of specific events, personal recollection. For example, your fist day at school, or what you did yesterday. Flashbulb memory is also included in declarative memory. Flashbulb memories involve the vivid recall of what individuals were doing when a major event occurred. This event may be a public or a private occurrence. For example, what you were doing when you heard that Princess Diana had died. These memories may be seen as 'special' and are thought, by researchers, to involve special brain mechanisms. In conclusion, I believe that the Multi-store model of memory is basic and limited in explaining such a complex phenomena as memory. ...read more.

*3 - Summary: varying degrees of appropriateness - some good description and evaluation of relevant theories and research. Some evidence of use of one text book to answer the question which leads to some material being not particularly relevant or not being used effectively, for example a list of types of memory. Improvement could be had by planning essay first. The better parts of the essay show evidence of thoughtful consideration of the topic.