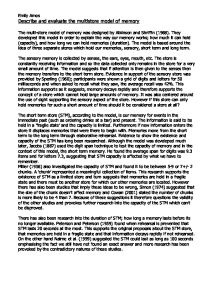 Describe and evaluate the multistore model of memory

Describe and evaluate the multistore model of memory The multi-store model of memory was designed by Atkinson and Shriffin (1968). They developed this model in order to explain the way our memory works; how much it can hold (capacity), and how long we can hold memories (duration). The model is based around the idea of three separate stores which hold our memories, sensory, short term and long term. The sensory memory is collected by senses, the ears, eyes, mouth, etc. The store is constantly receiving information and so the data collected only remains in the store for a very small amount of time. The model suggests that if attention is then given to the senses then the memory transfers to the short term store. Evidence in support of the sensory store was provided by Sperling (1960); participants were shown a grid of digits and letters for 50 milliseconds and when asked to recall what they saw, the average recall was 42%. ...read more.

suggested that the size of the chunk doesn't affect memory and Cowan (2001) stated the number of chunks is more likely to be 4 than 7. Because of these suggestions it therefore questions the validity of the other studies and provokes further research into the capacity of the STM which can't be disproved. There has also been research into the duration of STM; how long a memory lasts before its no longer available. Peterson and Peterson (1959) found when rehearsal is prevented that STM lasts 20 seconds at the most. This supports the original proposals about the STM store, that memories are held in a fragile state and that information decays rapidly if not rehearsed. On the other hand Nairne et al. (1999) suggested the STM could last as long as 100 seconds emphasising the fact we still have not found an exact answer and more research has been provoked by the contradictory natures of these studies. However some studies have suggested there is more to the multi-store model and that oversimplification is a key flaw of this model. ...read more.

On the other hand some research has shown the hippocampus to be part of the formation of STMs. Scoville and Milner (1957) carried out a case study on a man called HM, who in an attempt to reduce severe epilepsy had undergone surgery which unknown to him was experimental and his hippocampus had been removed. Afterwards, HM could not form any new memories but could recall LTMs, suggesting that the hippocampus may act as a gateway that new memories must pass through. This research goes against the idea of separate stores as the hippocampus is suggested to be connected to the processing of STMs whereas the hippocampus was only linked with LTMs in Squire et al's research. However this was a case study therefore the findings aren't generalisable to the whole population. In conclusion, the MSM is strong due to the testable predictions it provide and the wealth of research evidence to support it. However other evidence has contradicted it and it has been criticised as oversimplifying the memory process. So can it be the most valid and reliable model? ?? ?? ?? ?? Emily Amos ...read more.