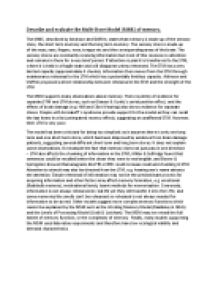 Describe and evaluate the Multistore Model of Memory.

﻿Describe and evaluate the Multi-Store Model (MMS) of memory. The MMS, described by Atkinson and Shiffrin, states that memory is made up of the sensory store, the short term memory and the long term memory. The sensory store is made up of the eyes, ears, fingers, nose, tongue etc and the corresponding areas of the brain. The sensory stores are constantly receiving information but most of this receives no attention and remains in there for a very brief period. If attention is paid it is transferred to the STM, where it is held in a fragile state and will disappear unless rehearsed. The STM has a very limited capacity (approximately 4 chunks). ...read more.

also shows evidence for separate stores. People with Korsakoff ?s syndrome provide support for the model as they can recall the last items in a list (unimpaired recency effect), suggesting an unaffected STM. However, their LTM is very poor. The model has been criticised for being too simplistic as it assumes there is only one long term and one short term store, which has been disproved by evidence from brain damage patients, suggesting several different short term and long term stores. It does not explain some observations, for example the fact that memory does not just pass in one direction ? LTM also affects the chunking of information in the STM; Miller & ...read more.

Simple rehearsal of information may not be the predominant process for acquiring information and other factors may affect memory formation, e.g. emotional (flashbulb memory), motivational levels, learnt methods for memorisation. Conversely, information is not always rehearsed in real life yet they still transfer it into the LTM, and some memories like smells can?t be rehearsed so rehearsal is not always needed for information to be stored. Other models suggest more complex memory functions which cannot be explained by the MSM such as the Working Memory Model (Baddeley & Hitch) and the Levels of Processing Model (Craik & Lockhart). The MSM may not reveal the full extent of memory function, or the complexity of memory. Finally, many studies supporting the MSM used laboratory experiments and therefore have low ecological validity and demand characteristics. ...read more.