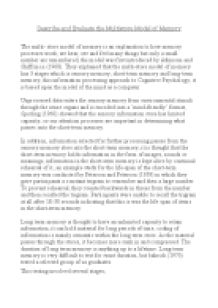 Describe and Evaluate the Multistore Model of Memory

﻿Describe and Evaluate the Multistore Model of Memory The multi- store model of memory is an explanation to how memory processes work, we hear, see and feel many things but only a small number are remembered, the model was first introduced by Atkinson and Shiffrin in (1968). They explained that the multi-store model of memory has 3 stages which is sensory memory, short-term memory and long-term memory, this information processing approach to Cognitive Psychology, it is based upon the model of the mind as a computer. Unprocessed data enters the sensory memory from environmental stimuli through the sense organs and is encoded into a ?mind-friendly? format, Sperling (1960) showed that the sensory information store has limited capacity, so our attention processes are important in determining what passes onto the short-term memory. ...read more.

To prevent rehearsal, they counted backwards in threes from the number and then recalled the trigram. Participants were unable to recall the trigram at all after 18-30 seconds indicating that this is was the life span of items in the short-term memory. Long term memory is thought to have an unlimited capacity to retain information, it can hold material for long periods of time, coding of information is mainly semantic within the long term store. As the material passes through the stores, it becomes more sunk in and compressed. The duration of long term memory is anything up to a lifetime. Long term memory is very difficult to test for exact duration, but bahrick (1975) ...read more.

Even for the participants who had left school nearly 50 years before the experiment, identification of names and faces stood at 70-80%. Considering the duration as well as the fact that the latter group were on average much older, this is a small difference. We have evidence to support the model. For example brain scanning (MRI) has been carried and the scans show that separate parts of the brain are being used as different tasks are carried out. This evidence backs up the model using separate stores for different memory. Several cases of patients who have suffered brain damage to their hippocampus & have memory deficits to there H.M, Clive wearing and K.F. There memory less tends to be selective supporting the idea of separate stores for different types of memory. ...read more.