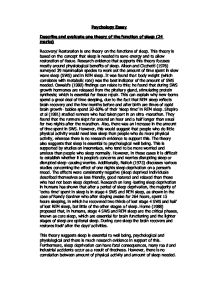 Describe and evaluate the recovery/restoration theory of the function of sleep.

Psychology Essay Describe and evaluate one theory of the function of sleep (24 marks) Recovery/ Restoration is one theory on the functions of sleep. This theory is based on the concept that sleep is needed to save energy and to allow restoration of tissue. Research evidence that supports this theory focuses mostly around physiological benefits of sleep. Alison and Cicchetti (1976) surveyed 39 mammalian species to work out the amount of time spent in slow wave sleep (SWS) and in REM sleep. It was found that body weight (which correlates with metabolic rate) was the best indicator of the amount of SWS needed. Oswald's (1980) findings can relate to this; he found that during SWS growth hormones are released from the pituitary gland, stimulating protein synthesis; which is essential for tissue repair. ...read more.

This is supported by studies on insomniacs, who tend to be more worried and anxious than people who sleep normally. However, in these cases it is difficult to establish whether it is people's concerns and worries disrupting sleep or disrupted sleep-causing worries. Additionally, Naitoh (1975) discusses various studies concerning the effect of one nights sleep deprivation on a person's mood. The effects were consistently negative (sleep deprived individuals described themselves as less friendly, good natured and relaxed than those who had not been sleep deprived. Research on long-lasting sleep deprivation in humans has shown that after a period of sleep deprivation, the majority of 'extra time' spent in sleep is in stage 4 SWS and REM sleep, as shown in the case of Randy Gardner who after staying awake for 264 hours, spent 15 hours ...read more.

However, there is no correlation between amount of physical activity and amount of sleep needed. Furthermore, as animals were used in many of the studies, the results could have been due to stress of participating in the experiment and the methods used to keep the animals awake (ethical issues); as opposed to sleep deprivation. In conclusion, as Home suggested, sleep may serve different purposes for different species, so while this theory may be sufficient in explaining the functions of sleep in humans, we cannot generalise to all species. For example, in reptiles the cerebral cortex, from which EEG recordings are obtained, is poorly developed and so we cannot study reptilian sleep. Whereas sleep is clearly identifiable in birds and mammals, suggesting it does have an important function. Also, due to differences between species, no single theory does provide a more thorough and well-developed account of sleep than the adaptive or evolutionary theory. ...read more.

Reasonable level of knowledge and evaluation.