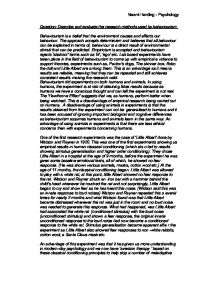 Describe and evaluate the research methods used by the behaviourist approach

Question: Describe and evaluate the research methods used by behaviourism Behaviourism is a belief that the environment causes and affects our behaviour. The approach accepts determinism and believes that all behaviour can be explained in terms of, behaviour is a direct result of environmental stimuli that can be predicted. Empiricism is accepted and behaviourism rejects 'abstract' terms such as 'id', 'ego' etc. Lab based experiments have taken place in the field of behaviourism to come up with empirical evidence to support theories, experiments such as, Pavlov's dogs, The skinner box, Bobo the doll and Little Albert are among them. This is an advantage as it means results are reliable, meaning that they can be repeated and still achieves consistent results making the research valid. Behaviourism did experiments on both humans and animals. In using humans, the experiment is at risk of obtaining false results because as humans we have a conscious thought and can tell the experiment is not real. The 'Hawthorne Effect' suggests that we, as humans, perform better when being watched. ...read more.

Watson and Rayner struck an iron bar with a hammer behind the child's head whenever he touched the rat and not surprisingly, Little Albert began to cry and show fear as he has heard this noise. (Watson said this was an innate response to loud noises) Watson and Rayner repeated this several times for nearly 2 months and what Watson found was that Little Albert became distressed whenever the rat was just in the room and no loud noise was needed to generate this response. What had happened, was Little Albert had associated the white rat (conditioned stimulus) with the loud noise (unconditioned stimulus) and shown a fear response, the original innate unconditioned response to the loud noise had now become a conditioned response to the white rat. Stimulus generalisation became apparent after the experiment as Little Albert also showed fear responses to non-white rabbits, cotton wool, a Santa Claus mask etc. An advantage of this experiment was that it has given us more understanding in modern-day psychology and we now have 'aversion therapy' based on these classical conditioning principles to help stop a number of maladaptive behaviours such as smoking, alcohol abuse, nail biting, stealing and many more. ...read more.

The third group (the control group) were exposed to a passive adult that showed no aggression and was neither rewarded nor punished after. The next stage of the experiment was to take each group of children into a room with an identical set up to that in the video and monitor how each behaved. The first group, nearly all the children copied the aggression. The second, were also aggressive, even though they saw the adult punished, however, there was slightly less aggression than the first group. The third group showed no aggression towards the toys. An advantage is that it shows aggression can be learned through imitation regardless of the consequence, for example, the children who saw the adults receive punishment were still aggressive. A disadvantage is that the experiment was conducted on toys and not real people. It is said to be lacking in ecological validity. One can not really conclude that violent films etc, can have an effect on a child's aggression towards others. Some psychologists argue that Bobo the doll is designed to spring back up when knocked over and is therefore, designed as a 'target.' Naomi Harding - Psychology ...read more.

The writer has discussed some experiments that have been carried out by behaviourists and has explained them very well. It may have been better however, to cover more experiments but in less detail in order to show an understanding of behaviourists' research methodology. Also, in order to increase the rating, the writer needs to think more carefully about the introduction and conclusion.