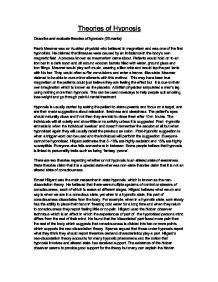 Describe and evaluate theories of hypnosis

Theories of Hypnosis Describe and evaluate theories of hypnosis (25 marks) Frank Mesmer was an Austrian physicist who believed in magnetism and was one of the first hypnotists. He claimed that illnesses were caused by an imbalance in the body's own magnetic field. A process known as mesmerism came about. Patients would hold on to an iron bar in a dark room and sit around wooden barrels filled with water, ground glass and iron filings. Mesmer would play soft music, wearing a lilac robe and would tap the patients with his bar. They would often suffer convulsions and enter a trance-like-state. Mesmer claimed to be able to cure minor ailments with this method. This may have been true magnetism or the patients could just believe they are feeling the effect but it is due to their own imagination which is known as the placebo. A British physician amputated a man's leg using nothing more than hypnosis. ...read more.

State theories claim that it is a special state whereas non-state theories claim that it is not an altered state of consciousness. Ernest Hilgard was the main researcher in state hypnosis which is known as the neo-dissociation theory. He believed that there were multiple systems of control or streams of consciousness, each of which is aware at different stages. Hilgard believes what we do and say is when we are in a conscious state, yet when in a hypnotic state, this part of consciousness dissociates from the body. For example, when in a hypnotic state, somebody has the ability to place their hand in freezing cold water for a long time and when they return to consciousness they report feeling little or no pain. Hilgard used the hidden observer technique which is an effect in which the experiences of part of the hypnotised persons mind differs from the rest of their mind. He found that the 'dissociated' part faced more pain than the rest of the body which suggests that consciousness is divided into two or more points which supports the neo-dissociation theory. ...read more.

People under hypnosis behave oddly because they want to believe in it and because they are willing to comply with suggestions made to them. This is because they believe that hypnosis is the idea of conformity. People are aware of how those who are hypnotised behave and therefore deliberately or not they conform when expected. Research has argued against the non-state theory and has found that by assessing the levels of deception and lying by measuring skin conductance. There was more deception in the stimulators from those in consciousness than from the hypnotised participants. The hypnotised participants did not seem to be lying. The research suggests that hypnosis is a topic which is always open to debate as to whether or not it is an altered state of mind. Wagstaff claims that 'If we have not been able to find the explanation for hypnotic phenomena, it is not because we lack technology; it is because there is no single explanation for all hypnotic phenomena.' There is evidence for and against both the state theory and the non-state theory and therefore a certain conclusion cannot be drawn. ...read more.

Although the writer has included quite a lot of information in this essay it appears rushed. The writer introduces a concept but then does not go on to fully explain it. It is therefore confusing to read at times. Also, it would be helpful to introduce this topic with more detail about hypnosis itself and the background to its usage. Freud, for example, used hypnotic technique in his psychoanalysis. The writing style needs to be improved and the work needs more detail and clarity. If the writer takes these comments on board the score could easily be improved upon.