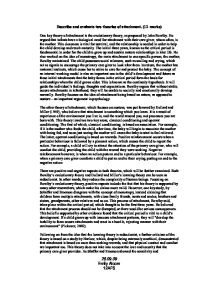 Describe and evaluate two theories of attachment. (12 marks) One key theory of attachment is the evolutionary theory, as proposed by John Bowlby. He argued that infants have a biological need for attachment with their care giver, whom often, is the mother. This closeness is vital for survival, and the relationship is needed in order to help the child develop and reach maturity. The initial three years, known as the critical period is fundamental in order for the child to grow up and sustain mature relationships in later life. He also worked on the idea of monotropy, the main attachment to one specific person, the mother, Bowlby maintained. The child possesses social releasers, such as smiling and crying, which act as signals to encourage the primary care giver to look after them. In return, the mother has maternal instincts, which cause her to strive to care for and protect the baby. ...read more.

The latter, operant conditioning is based on rewards. Positive reinforcement occurs when a particular behaviour is followed by a pleasant action, which causes the child to repeat the action. For example, a child will cry to attract the attention of the primary care giver, who will comfort the child, providing the child with the reward they were seeking. Negative reinforcement however, is when an action puts an end to a particular behaviour. For example, when a primary care giver comforts a child to put an end to their crying, putting an end to the negative action. There are positive and negative aspects to both theories, which will be further examined. Both Bowlby's evolutionary theory and Dollard and Miller's learning theory can be seen as reductionist. In other words, they reduce the complexity of human beings. Focusing on Bowlby's evolutionary theory, positive aspects include the fact that his theory is supported by many other researchers, which make his claims more valid. ...read more.

This theory does not take into account the love and security that the primary care giver provides. As Shaffer and Emerson showed the sensitivity and responsiveness of the carer are also key factors to forming secure attachments and relationships. However, a positive aspect could be that it takes into account that children can be formed by their upbringing, environment and experiences, as opposed to Bowlby who focuses on the idea of nature. It doesn't exclude those things that make us individual, for example with twins, who can have the same genetic makeup but completely different personalities. To conclude, I believe that the theories both have strong and weak points, and that they each had an impact on society and how we looked after children. Furthermore, the fact that others have gone on to further their research shows that it will have had some influence on the modern world, albeit indirectly, based on his findings. 28.09.09 Emily Alcorn 12AFS ...read more.

The writer starts off really well with some excellent descriptions of both Bowlby's attachment theory and then Dollard and Miller's social learning theory. This shows that the writer has understood clearly the main points of each theory. Unfortunately the writing on the positive and negatives of both theories is rather thin on the ground. It would be better to spend one paragraph on the positives and negatives of each theory. Then the writer needs to draw some conclusions at the end.

This has the potential to be a very good essay if the writer could just improve the last few paragraphs. The writer may need to read a little more about the criticisms of both theories.