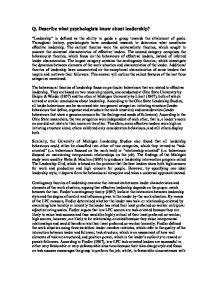 Describe what psychologists know about leadership.

Q. Describe what psychologists know about leadership? "Leadership" is defined as the ability to guide a group towards the attainment of goals. Throughout history, psychologists have conducted research to determine what constitutes effective leadership. The earliest theories were the universalistic theories, which sought to uncover the universal characteristics of effective leaders. The second category comprises the behaviourist theories, which focus on the behaviours of effective leaders, instead of inferred leader characteristics. The largest category contains the contingency theories, which investigate the dynamics between elements of the work situation and characteristics of the leader. Additional theories of leadership have concentrated on the exceptional characteristics of some leaders that inspire and motivate their followers. This answer will outline the salient features of the last three categories mentioned. The behavioural theories of leadership focus on particular behaviours that are related to effective leadership. They are based on two research projects, one conducted at Ohio State University by Halpin & Winder (1957) and the other at Michigan University by Likert (1967), both of which arrived at similar conclusions about leadership. According to the Ohio State Leadership Studies, all leader behaviours can be narrowed into two general categories: initiating structure (leader behaviours that define, organise and structure the work situation) and consideration (leader behaviours that show a genuine concern for the feelings and needs of followers). ...read more.

Exceptional abilities of charismatic leaders have been variously defined as the ability to convey shared group vision and express confidence in one's own abilities as well as those of others (House et al., 1987), high social skills and the ability to relate to followers at a deep, emotional level (Hogan et al., 1990), sensitivity to followers and situation, ability to inspire, and the desire to change the status quo (Conger et al., 1987, 1998). The work situation and attributes of followers are also significant to leader success. Charismatic leaders are most successful in situations with unclear objectives and an unstable environment. They also achieve more if their followers identify with the leaders, are vulnerable to the leader's emotional messages and are willing to follow him or her. The transformational leadership theory focuses on the leader's ability to provide shared values and a vision for the future for the work group, thereby developing a work culture that stimulates high-performance activities (Bass, 1990). They are viewed as responsible for producing extraordinary results, as they convey a sense of mission, stimulates workers' learning experience and inspire innovative ways of thinking (Hater et al., 1988). In summary, effective leadership has been variously explained as the result of possessing certain traits, exhibiting certain behaviours and the interaction between certain traits and behaviours. Each broad category of theories and their sub-theories have their individual strengths and weaknesses, but all have made valuable contributions to the understanding of what constitutes effective leadership. ...read more.

The contingency and charismatic/transformational theories have taken a far more comprehensive approach in their examination of the dynamics between leader characteristics and work situation. Secondly, the behavioural theories fall short of making firm predictions about the relationship between leader behaviour and specific work outcomes in all types of work environments. Although, some contingency theories such as path-goal theory are also deficient in this respect (Yukl, 1989), some such as the Fiedler's model make definite predictions about situations in which certain leaders will be effective. The behavioural theories' application, Leadership Grid, takes a universalist approach in this assumption that there is a single ideal leadership style, referred to as 'Team Manager', which is high on both task-orientation and relationship-orientation. This not only contradicts the behavioural theories but also contingency theories which hold that effective leadership is a match between leadership style and work situation. Fiedler's Leader Match has also been criticised for not following through with the predictions made by his theory (Jago et al., 1986). However, this is not the case with the decision-making model, which is consistent with the theory's predictions (Vroom et al., 1978), or the LMX model, which is also consistent with its theory. Leader Match and the LMX model are both straightforward applications that are easy to implement (Ayman et al., 1995). The decision-making model, however, has gotten progressively more complex with revisions to the theory, making it more difficult to use. ...read more.