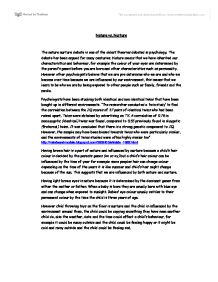 The nature nurture debate is one of the oldest theories debated in psychology.

Nature vs. Nurture The nature nurture debate is one of the oldest theories debated in psychology. The debate has been argued for many centuries. Nature means that we have inherited our characteristics and behaviour, for example the colour of your eyes are determined by the parent's genes before you are born and other characteristics such as personality. However other psychologists believe that we are pre determine who we are and who we become over time because we are influenced by our environment, this means that we learn to be who we are by being exposed to other people such as family, friends and the media. ...read more.

However, the sample may have been biased towards twins who were particularly similar, and the environments of twins studied were often highly similar too" http://mindsandmodels.blogspot.com/2009/03/shields-1962.html Having brown hair is a part of nature and influenced by nurture because a child's hair colour is decided by the parents genes (xx or xy) but a child's hair colour can be influenced by the time of year for example some peoples hair can change colour depending on the time of the years it is like summer and child's hair might change because of the sun. This suggests that we are influenced by both nature and nurture. Having light brown eyes is nature because it is determined by the dominant genes from either the mother or father. ...read more.

Gender is being influenced by environmental factors these days for example generally children learn their gender role by the age of 3. Some evidence suggests this can happen through observing other and repeating expected behaviours for the gender. Today it is accepted that childhood behaviour is neither determined by nature or nurture .Both sides of the debate have strong evidence and facts to support their view "Mother Nature has plainly not entrusted the determination of our intellectual capacities to the blind fate of a gene or genes; she gave us parents, learning, language, culture and education to program ourselves with." http://wilderdom.com/personality/L4-1IntelligenceNatureVsNurture.html but neither side of the argument is right or cannot proved right. ...read more.