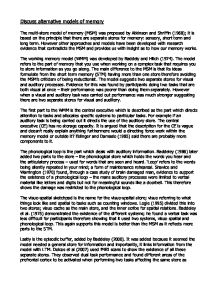 Discuss alternative models of memory The multi-store model of memory (MSM) was proposed by Atkinson and Shriffin (1968); it is based on the principle that there are separate stores for memory: sensory, short term and long term. However other approaches and models have been developed with research evidence that contradicts the MSM and provides us with insight as to how our memory works. The working memory model (WMM) was developed by Baddely and Hitch (1974). The model refers to the part of memory that you use when working on a complex task that requires you to store information as you go along. The main difference to the MSM is that its ideas formulate from the short term memory (STM) having more than one store therefore avoiding the MSM's criticism of being reductionist. The model suggests two separate stores for visual and auditory processes. Evidence for this was found by participants doing two tasks that are both visual at once - their performance was poorer than doing them separately. ...read more.

Logie (1995) divided this into two stores; visuo cache as the main store, and the inner scribe for spatial relations. Baddeley et al. (1975) demonstrated the existence of the different systems; he found a verbal task was less difficult for participants therefore showing that it used two systems, visuo spatial and phonological loop. This again supports this model is better than the MSM as it reflects more parts to the STM. Lastly is the episodic buffer, added by Baddeley (2000). It was added because it seemed the model needed a general store for information and importantly, it links information from the model with LTM. Dolcos et al (2007) used fMRI scans to show the existence of all these separate stores. They observed dual task performance and found different areas of the prefrontal cortex to be activated when performing two tasks affecting the same store as predicted by the WMM. However D'Esposito (2007) suggested working memory might not exist as a separate system therefore going against the whole model. ...read more.

researched transfer appropriate processing and found participants recalled words that rhymed (phonemic processing) better than words that had been deeply processed. This research therefore goes against the LOP approach and it could be argued that performance depends on what you need to recall and that there are other explanations for memory. However Craik and Lockhart (1990) recognised this problem and suggested 'depth' refers to greater processing within the relevant domain. Another major criticism of the LOP approach is the fact it becomes a circular definition e.g. something is remembered if its deeply processed and if its deeply processed, then you will be able to recall it better. This criticism makes the LOP seem reductionist but depth has been described to include organisation, distinctiveness, elaboration and effort; therefore showing depth is more complex. In conclusion, although research has been found to support and refute both the WMM and the LOP approach, both theories cannot be known for sure if they are correct. The MSM is also at fault, therefore the mystery of our memory still remains; the ghost in the machine, we can observe the actions (machine) but never see inside the mind. ...read more.