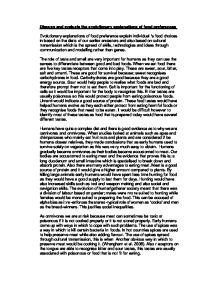 Discuss and evaluate the evolutionary explanations of food preferences

Discuss and evaluate the evolutionary explanations of food preferences Evolutionary explanations of food preference explain individual's food choices in based on the diets of our earlier ancestors and also based on cultural transmission which is the spread of skills, technologies and ideas through communication and modelling rather than genes. The role of taste and smell are very important for humans as they can use the senses to differentiate between good and bad foods. When we eat food there are five key tastes receptors that come into play. These are sweet, sour, bitter, salt and umami. These are good for survival because; sweet recognises carbohydrates in food. Carbohydrates are good because they are a good energy source. Sour would help people to realise what foods are bad and therefore prompt them not to eat them. Salt is important for the functioning of cells so it would be important for the body to recognise this. Bitter tastes are usually poisonous so this would protect people from eating poisonous foods. Umami would indicate a good source of protein. ...read more.

Hunting would have also increased skills such as tool and weapon making and also social and navigation skills. The evolution of hunter/gatherer society meant that there was a division of labour based on gender; males were more suited to hunting while females would be more suited to preparing the food. This can be accused of alpha bias as it re-enforces the stereo-typical role of women as 'cooks' and men as the bread-winners. This justifies social inequalities. As omnivores we are at risk because meat can sometimes be toxic or poisonous if it is not cooked properly or it is not stored properly. Early humans came up with ways in which to cope with such problems. The use of spices was a way in which to kill certain bacteria in foods. In hot countries spices are used to help preserve meat while also adding flavour. The use of spices spread through cultural transmission, this is when Another obvious way in which to preserve meat would be cooking it. (Wrangham et al. 2006). Also receptors on the tongue are able to recognise bitter and sour tastes, this tastes are usually associated with poisonous or food that is not fit for eating. ...read more.

The evolutionary explanation focuses mainly on nature rather than nurture. It assumes that all food choices are down to genetics and ignores the nurture side which would include environmental factors such as where people live and also socio-economic factors such as how much money people have to spend on food. It also ignores other factors that might influence food choices such as religion and culture. This makes the explanation reductionist as it only explains food preference in terms of nature. To improve on the explanation it would need to include other factors such as environment and cognitive influences. The evolutionary explanation can be supported by lot of research evidence as well as fossil evidence as well as how our body is structured e.g. the presence of the duodenum and small intestine which are able to digest foods such as meat. There is however very little fossil evidence. The evolutionary explanation is good to explain morning sickness and why women react they way they do when they eat certain foods. In our society we no longer live in a hunter/gathered society so the explanation offered for why humans choose certain foods would be very much dated. ...read more.