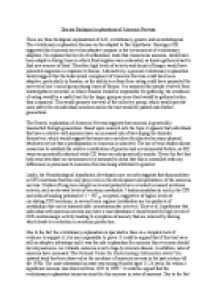 ﻿Discuss Biological explanations of Anorexia Nervosa: There are three biological explanations of A.N; evolutionary, genetic and neurobiological. The evolutionary explanation focuses on the adapted to flee hypothesis. Guisinger (03) suggested that Anorexia served an adaptive purpose in the environment of evolutionary adaption. He explains that levels of restlessness, traits that characterise anorexia, would have been adaptive during times in which food supplies were exhausted, as hunter-gatherers had to find new sources of food. Therefore high levels of activity and denial of hunger would have promoted migration in response to famine. Alternatively, a general evolutionary explanation would suggest that the behavioural component of Anorexia Nervosa could have been adaptive, particularly in females, as the ability to refrain from eating could have promoted the survival of one?s social group during times of famine. It is assumed that people evolved from hunter/gatherer societies, in which females would be responsible for gathering; the avoidance of eating would be a useful trait for the larger group as more food would be gathered rather than consumed. ...read more.

Due to the fact the evolutionary explanation is speculative there is a complete lack of evidence to support it; it is near impossible to prove. It could be argued that if this trait were still an adaptive advantage and it was the sole explanation for anorexia then everyone should develop anorexia. As it stands, anorexia is not a hugely common disease. In addition, rates of anorexia have increased. The National Center for Biotechnology Information stated ?An upward trend has been observed in the incidence of anorexia nervosa in the past century till the 1970s. The most substantial increase was among females aged 15-24 years, for whom a significant increase was observed from 1935 to 1999.? It could be argued that the evolutionary explanation cannot account for this increase in rates of anorexia. Due to the fact the evolutionary explanation of Anorexia cannot be supported by research this explanation therefore has no practical applications. Even if it could be proved, this explanation is revolved around evolution, a process over which humans can exert no real control. ...read more.

Focussing on Holland?s research specifically, the small sample size used would severely decrease its population validity. Holland?s study introduces the idea that the biological explanations of anorexia nervosa are reductionist. With a concordance rate of only 55% with twins whose genes are identical it is clear there are other factors involved, else the concordance rate would be 100%. It is not just the genetic explanation of anorexia that takes a narrow explanatory focus. All three biological explanations focus solely on one casual factor and consequently overlook other potential important factors, which ultimately leads to an oversimplified account of anorexia. There is evidence to support the fact that there are other important factors involved with anorexia. Research by Button et al (96) supports the cognitive explanation, as those girls rated as having low self-esteem at 11/12 years were more likely to develop an eating disorder at 15/16 years. Button?s findings indicate that a person?s perceived worth/abilities, which are sometimes irrational, influence the probability of anorexia. Button?s research therefore supports the idea that the biological explanations are reductionist because they clearly all overlook other important factors such as cognition. ...read more.