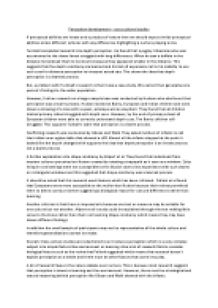 ﻿Perception development ? cross cultural studies If perceptual abilities are innate and a product of nature then we should expect similar perceptual abilities across different cultures with any differences highlighting a nurture playing a role. Turnball completed research into depth perception. He found that a pygmy tribesman who was accustomed to the dense forest struggled with long differences. When he saw a buffalo in the distance he believed them to be insects because they appeared smaller in the distance. This suggests that the depth constancy are learned and his lack of experience let to his inability to use such cues for distance perception to interpret actual size. This shows the idea that depth perception is a learned process. But, a problem with Turnball?s research is that it was a case study. ...read more.

A further explanation into shape constancy by Allport et al. They found that individuals from western cultures perceived an illusion created by rotating a trapezoid as it seen as a window. Zulus living in rural settings were not susceptible to this illusion due to less experience with such shares or rectangular windows and this suggested that shape constancy was a learned process. It should be noted that this research used illusions which has been criticised. Pollark et al found that Europeans were more susceptible to the muller-lyer illusion because their retinas permitted them to detect contours better suggesting a biological reason for cultural differences rather than learning. Another criticism is that there is imposed etic because one test or measure may be suitable for one culture but not another. ...read more.

However, there must be a biological and natural reasoning behind perception like Gibson and Walk showed with the infants. In addition, research is mostly deterministic because it suggests that everyone in that culture will act in that specific way. It fails to consider free will and how some people in the culture may show different signs to perception and may act differently. Also, cross cultural research is prone to experimenter bias as researchers are more inclined to observe behaviour that supports their hypothesis rather than being observant to similarities in perception which means results may not be as valid and reliable. In conclusion, although a lot of cross cultural research is useful in studying differences in perceptual development, it does have limitations. Research is usually difficult to generalise due to small samples and is a target to experimenter bias. Therefore findings cannot purely be reliable and there may be other factors that need to be taken into account. ...read more.