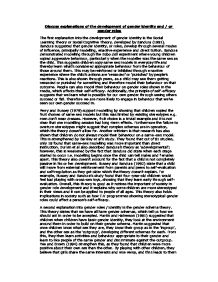 Discuss explanations of the development of gender identity and / or gender roles The first explanation into the development of gender identity is the Social Learning Theory or Social Cognitive Theory, developed by Bandura (1991). Bandura suggested that gender identity, or roles, develop through several modes of influence, principally modelling, enactive experience and direct tuition. Bandura demonstrated modelling through the Bobo doll experiment where young children copied aggressive behaviour, particularly when the modeller was the same s*x as the child. This suggests children copy same s*x models in everyday life and thereby learn what's considered appropriate behaviour from the behaviour of those around them. This may be reinforced or inhibited through enactive experience where the child's actions are 'rewarded' or 'punished' by people's reactions. This is also shown through peers, as a child may see them getting rewarded or punished for something and therefore model their behaviour on that outcome. People can also model their behaviour on gender roles shown in the media, which affects their self-efficacy. ...read more.

modelling begins once the child can tell males and females apart. This theory also doesn't account for the fact that a child is not completely passive in his or her development. Bussey and Bandura (1992) state that a child will move from external reinforcement from parents and peers to self-evaluation and self-regulation as they get older which the theory doesn't explain. For example, Bussey and Bandura's study found that four-year-old children would feel bad playing with cross-s*x toys, showing that they learn early through self-evaluation. Overall, this theory is good as it notices the important of society in gender role development and it explains why some children are more stereotyped in their views and it can be applied to people of all ages. This theory also holds implications in society such as how T.V programmes showing stereotypical gender roles could affect a person's self-efficacy. A second explanation into gender roles / identity is the gender schema theory. This theory states that we have all have gender schemas, which tell us how we should act in order to be accepted. ...read more.

Being gender schematic means that you organise activities and behaviours into masculine and feminine categories, and therefore leads to gender stereotyped behaviour. Those who are non-gender schematic develop an androgynous gender schema, and therefore behave in ways that represent males and females. This theory is strengthened by the study by Martin and Little, which found that pre-school children had strong gender stereotypes, which shows that they had information about gender roles at a young age, which is what the gender schema theory suggests. The gender schema theory suggests that children will only pay attention to information that relates to their gender schema, and this is also strengthened by Martin and Halverson (1983) who found that when children under six were asked to recall pictures of people, they recalled more gender consistent people. Bradbard et al told children that gender-neutral items were either for males or females, and found that the children took much more interest in those items in their ingroup. This also suggests that children pay more attention to their ingroup. However, this research can be criticised as it is based on trivial information, and this therefore may not be true of all types of information. ...read more.

Response to Question: All in all, this answers the question very well Ã¢â‚¬â€œ a balanced amount of description and evaluation is given. This means the reader is able to understand not only the background information of the theories, but also ...

Response to Question: All in all, this answers the question very well Ã¢â‚¬â€œ a balanced amount of description and evaluation is given. This means the reader is able to understand not only the background information of the theories, but also the strengths and limitations of them. The theories of Social Learning and Gender Schemas are comprehensively covered with a large paragraph describing each. Then both are evaluated clearly and separately for example Ã¢â‚¬Å“Perry and Bussey (1979) support modelling by showing that children copied the fruit choices of same sex modelsÃ¢â‚¬Â and then Ã¢â‚¬Å“This theory also holds implications in society such as how T.V programmes showing stereotypical gender roles could affect a personÃ¢â‚¬â„¢s self-efficacy.Ã¢â‚¬Â My only criticism of the overall response is that I wouldÃ¢â‚¬â„¢ve liked to see a clear conclusion at the end to sum-up the whole essay (this could simply be a couple sentences reinforcing the main points already made and possibly saying which explanation is better). A conclusion ensures that the reader knows what the main point/Ã¢â‚¬â„¢decisionÃ¢â‚¬â„¢ of the essay was Ã¢â‚¬â€œ the essay title says Ã¢â‚¬ËœdiscussÃ¢â‚¬â„¢ so the examiners are looking for evidence for and against a theory and then a decision as to how good it is.

Level of Analysis: A great deal of critical analysis was provided Ã¢â‚¬â€œ with both points to support the theories and also dispute them. For example evidence is provided by Perry and Bussey but then this evidence is criticised for being too focussed on trivial examples and short-term effects. This is good as it shows the reader that the writer has considered both sides of the argument in an unbiased manner Ã¢â‚¬â€œ something that is necessary for successful scientific research. To improve the analysis I would suggest a sentence to explain what each of the studies provided involved (this has been done towards the end of the essay e.g.Ã¢â‚¬Â Martin and Halverson (1983) who found that when children under six were asked to recall pictures of peopleÃ¢â‚¬Â but not consistently). I think this would add a bit more context to the analysis and therefore allow the reader to decide how useful/relevant/supportive the evidence is.

Quality of writing: No criticism here, all the spelling and grammar are good. Additionally technical terms such as Ã¢â‚¬Ëœenactive experienceÃ¢â‚¬â„¢ and Ã¢â‚¬ËœmodellingÃ¢â‚¬â„¢ are defined and used successfully.
Star rating: 4 (I think this could easily be a 5 with a few of the improvements suggested)