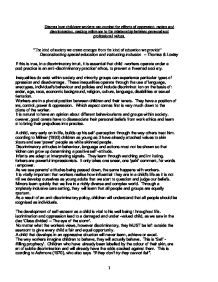 Discuss how childcare workers can combat the effects of oppression, r****m and discrimination, making reference to the relationship between personal and professional values.

Discuss how childcare workers can combat the effects of oppression, r****m and discrimination, making reference to the relationship between personal and professional values. "The kind of society we create emerges from the kind of education we provide" Deconstructing special education and instructing inclusion - Thomas & Loxley If this is true, in a discriminatory intuit, it is essential that child-workers operate under a 'good practice is an anti-discriminatory practice' ethos, to prevent a thwarted society. Inequalities do exist within society and minority groups can experience particular types of oppression and disadvantage. These inequalities operate through the use of language, stereotypes, individual's behaviour and policies and include discrimination on the basis of: gender, age, race, economic background, religion, culture, language, disabilities or s****l orientation. Workers are in a pivotal position between children and their tenets. They have a position of care, control, power & oppression. Which aspect comes first is very much down to the actions of the worker. It is natural to have an opinion about different behaviourisms and groups within society. However, good carers have to disassociate their personal beliefs from work ethics and learn not to bring their prejudices into practise. A child, very early on in life, builds up his self-perception through the way others treat him. According to Millner (1993) children as young as 3 have already attached values to skin colours and see 'power' people as white skinned people. ...read more.

If a child has toys and cultural materials that are more appropriate to his norm, it appears that he learns and performs better. This is highly impacting upon equipment used in care settings with an anti-discriminatory practice that encourages each child to excel. It is likely between any parent and worker, that there will be differences of opinions. With cultural issues it is important to remember that neither are right or wrong, unless one is harmful to the child. Differences should be openly discussed with emphasis on how they can effect and better the child. Within culture, is religion. At present within the UK, Christianity is the dominant religion. Strict religious beliefs incorporate principles on dress and dietary issues that affect everyday lives, which we may be un-aware of. Hindus for example, may not eat cow, as it is a sacred animal to them. Certain religions may "interfere" with the smooth running of the day. Religions have very different beliefs, The Middle East is a good example where these have clashed violently. It is important that the worker teaches all children that not one race, culture or religion is better or more intelligent than another - UNESCO (1950). They should also have a brief understanding of what each religion incorporates, and different procedures so as not to offend or discriminate. I wonder how many teachers would be aware that a Buddhist child could not take part in a dissection, as they are not allowed to kill or harm. ...read more.

Some children may have 'silent periods'. Workers should not take this as a sign they are 'slow', as they are listening, taking in and understanding the language. They will speak when they are confident. Every measure should be taken to ensure positivity, such as smiles, praising and hand clapping. Workers could have music workshops, where styles from countries around the world are played. Eg: flamenco, reggae or jazz. It should be an enjoyable occasion where children are allowed to freely express themselves. They could be shown costumes that are associated with the styles. Voices and instruments could also be used. This could be another way of including parents. If education is to begin at home, they too must understand that an anti-discriminatory practice is the future. If care settings are going to be successful in an anti-discriminatory practice, they need a radical process for change. They need to: * Look at existing resources and materials to see what messages are portrayed. * Learn from others. Involve parents and outside speakers. * Look at the role models within the setting. What message does an all white staffing give? * Monitor and improve existing ways. If workers are committed to providing a completely anti-discriminatory/oppressive care setting, they should try following these points, set out by Rosalind Millam in Anti-discriminatory practice. * Respect and value all children as unique individuals * Provide opportunities for all children to explore their identities * Not use derogatory, discriminatory or negative language, talking about certain groups. * Have resources with positive images for all groups in society, not just children in the nursery. 1 ...read more.

Certainly this essay shows an extensive number of points about ways in which workers can develop and evolve care of children from all cultures. What needs developing is awareness of current practice, legislation and educational research. 3*