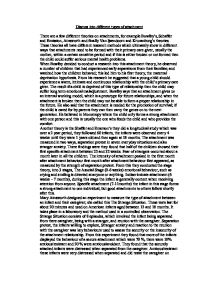 discuss into different types of attachment

Discuss into different types of attachment There are a few different theories on attachments, for example Bowlby's, Schaffer and Emission, Ainsworth and finally Van ljzendoorn and Krunanburg's theories. These theories all have different research methods which ultimately show in different ways that attachments need to be formed with their primary care giver, usually the mother, within a certain sensitive period and if this is either broken or not formed then the child could suffer serious mental health problems. When Bowlby decided to conduct a research into this attachment theory, he observed a number of children that had experienced early separations from their families; and watched how the children behaved; this led him to his first theory, the maternal deprivation hypothesis. From his research he suggested that a young child should experience a warm, intimate and continuous relationship with the child's primary care giver. ...read more.

There findings were they found that half of the children showed their first specific attachment between 25 and 32 weeks. Fear of strangers occurred about a month later in all the children. The intensity of attachment peaked in the first month after attachment behaviour first month after attachment behaviour first appeared, as measured by the strength of separation protest. From this they conducted the stage theory, into 3 stages, The Asocial Stage (0-6 weeks) emotional behaviour, such as crying and smiling is directed at anyone or anything. Indiscriminate attachment (6 weeks - 7 months), during this stage the infant is generally content when receiving attention from anyone. Specific attachment (7-11months) the infant in this stage forms a strong attachment to one individual, but good attachments to others follow shortly after this. Mary Ainsworth designed an experiment to measure the type of attachment between an infant and their caregiver; she called this The Strange Situation. ...read more.

Anxious/avoidant did not seek contact with the caregiver and showed very little distress at separation. This gives a good idea to be able to distinguish between attachment types. Finally there were Van ljzendoorn and Krunanburg's they did research into cross culture variations of attachment, they used results of 32 studies and used the strange situation to measure attachment. The research was from 8 different countries including, US, UK, Germany, Japan, China and Israel. They found that secure attachment was the most common in the 8 countries. The western cultures had a more avoidant dominant insecure attachment, while the non western were resistant and was the dominant insecure attachment. This shows that there is a difference in cultures and how the children are raised, to each individual culture. In conclusion this just shows that there are many different research and theories on attachment, all really resulting in saying that attachments need to be formed to give the child the basis of what it needs for the future. Different cultures do display a difference in attachment based on how they are raised. ...read more.

A shaky start with some confusion about the difference between theory and research. Mainly descriptive with some relevant research quoted - room for development on evaluation. Include the applications of Bowlby's theory in the real world. Proofread! 3*