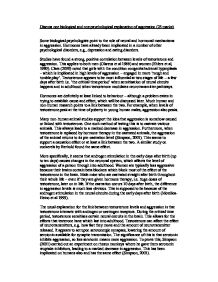 Discuss one Biological and one Psychological Explanation of Aggression

Discuss one biological and one psychological explanation of aggression (25 marks) Some biological psychologists point to the role of neural and hormonal mechanisms in aggression. Hormones have already been implicated in a number of other psychological disorders, e.g., depression and eating disorders. Studies have found a strong, positive correlation between levels of testosterone and aggression. This applies to both men (Olweus et al 1988) and women (Ehlers et al, 1980). Clare (2000) noted that girls with the condition congenital adrenal hyperplasia - which is implicated in high levels of aggression - engaged in more 'rough and tumble play'. Testosterone appears to be most influential at two stages of life - a few days after birth i.e. 'the critical time period' when sensitisation of neural circuits happens and in adulthood when testosterone modulates neurotransmitter pathways. Hormones are definitely at least linked to behaviour - although a problem exists in trying to establish cause and effect, which will be discussed later. Much human and non-human research points to a link between the two. For example, when levels of testosterone peak at the time of puberty in young human males, aggression also peaks. Many non-human animal studies support the idea that aggression is somehow caused or linked with testosterone. One such method of testing this is to castrate various animals. ...read more.

Klinesmith et al (2006) showed how testosterone levels change as a result of behaving aggressively. Male participants held either a gun or a children's toy as part of an experiment. Those who held the gun behaved three times as aggressively as those who handled the toy. Thus, it would seem that aggressiveness can be affected via testosterone by environmental stimuli. In conclusion, it seems that the effect of hormones such as testosterone are still very contrived. It would be reductionist to assume that hormones indefinitely cause aggression, but there does seem to be an effect. Any conclusions on causation must be reviewed with caution. No effort was made in these studies to distinguish the different types of aggression, i.e. hostile, pro-social and instrumental aggression. This may be important in determining where the causes of aggression lie. Testerone appears to be implicated in only certain forms of aggression e.g. inter-male aggression, but plays no part in predatory aggression (Simpson, 2001). There is more than just testosterone involved in implicating aggression. This is seen in non-human animals, e.g., many animals display different levels of aggression depending on the time of year and breeding season, with a corresponding increase in testosterone levels. There are also methodological problems with testosterone-aggression research. It is not particularly easy to measure testosterone levels in animals. ...read more.

The results were that children who had witnessed an aggressive model punching the doll scored significantly higher on levels of aggression than those in the control group, where their model did not punch the doll at all. Thus it would seem that aggression is influenced by us modelling our behaviours on others. Of course, the study can be criticised for demand characteristics, as the situation was staged and the children may have felt that they were supposed to hit the doll, both because that is what it was designed for and if they were in the aggressive condition, because they felt that they were supposed to copy the behaviour. Other criticisms include the fact that only western children were used, no adults or people from other cultures, so the study suffers from age- and culture-bias. Overall, SLT has a good reputation amongst psychologists. It has useful applications for psychologists dealing with controlling people's aggression and other behaviours. It has been supported by numerous studies, including the Bobo doll study. Other studies of Bandura's have found that watching cartoon aggression produces as much aggression in children as viewing live or filmed aggressive behaviour. It makes cognitive sense that environmental experiences would influence our social learning of violence, especially as children. Some have criticised SLT for being reductionist however, as it fails to account for individuals' biological factors and the differences of indivuals due to genetic, neurological and learning differences (Jeffery, 1990). ...read more.