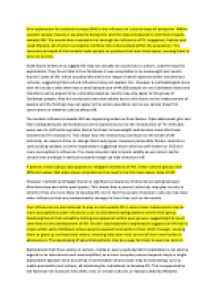 ﻿One explanation for anorexia nervosa (AN) is the influence of cultural views of attraction. Within western society, beauty is equated to being slim, and this idea is believed to contribute heavily towards AN. The media then maintains this through the influence of TV, magazines, fashion and celeb lifestyle, all of which constantly reinforce this cultural ideal within the population. The constant portrayal of slim models leads people to question their own body types, causing them to strive to be thin. Hoek found evidence to suggest AN may not actually be caused du to culture, undermining this explanation. They found that in the Caribbean it was acceptable to be overweight and results found 6 cases of AN, which actually falls within the range of rated reported within westernised cultures, suggesting that cultural influences may not explain this. However a methodological issue with this study is that there was a small sample size of 44,000 people on one Caribbean island and therefore can be argued to be culturally biased as results may only apply to this group of Caribbean people. ...read more.

The study may also lack internal validity as we cannot say for certain that a change in attitude towards image can lead directly to AN. A person?s ethnic group also appears to mitigate incidences of AN. Other cultural groups with different values that place lower emphasis on the need to be thin have lower rates of AN. However, Cachelin and Regan found no significant prevalence of disordered eating between Afro-American and white participants. This shows that a person?s ethnicity may play no role in whether they are more likely to develop AN, but in fact the people of western cultures may have other influences that are predominantly stronger in their lives such as the media. Peer influences are also believed to play a role towards AN in some cases. Adolescents may be more susceptible to peer influences such as disordered eating patterns within their group. ...read more.

Such psychological explanations focus on the nurture side of the argument, suggesting it is out environmental factors causing AN. However the biological approach suggests that it may be neural or genetic causes, suggesting nature may be the cause. A diathesis stress model may better explain how both play a role, with some individuals having the genetic predisposition, along with sufficient environmental triggers, causing the onset of AN. Therefore showing how nature and nurture interact Personality traits are thought to play an important role in the development and maintenance of AN. Perfectionism is a trait that is often found in those with AN, along with impulsiveness. Although this is often linked with bulimia, Research has shown those with AN often act more impulsively than they self-report. Halmi supports the importance of perfectionism as a risk factor for AN as they found that the extent of perfectionism was directly related to the severity of AN experienced by the women. Showing that there is a positive correlation that those with more perfectionist personalities are more prone to developing AN. ...read more.