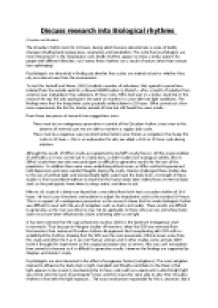 ﻿Discuss research into Biological rhythms (Circadian and Ultradian) The Circadian rhythm lasts for 24 hours, during which humans demonstrate a series of bodily changes including body temperature, respiration and metabolism. The cycle that psychologists are most interested in is the ?sleep/wake cycle. Bodily rhythms appear to show a similar pattern for people with different lifestyles, so it seems these rhythms are a result of nature rather than nurture (our upbringing). Psychologists are interested in finding out whether they cycles are indeed natural or whether they rely on external cues from the environment? To test this Aschoff and Wever (1962) studied a number of volunteers that agreed to spend time isolated from the outside world in a disused WWII bunker in Munich ? after a month of isolation from external cues (zeitgebers) they adopted a 25 hour cycle. Siffre took part in a similar study but in this research he was the only participant. He spent six months in a cave with low light conditions. The findings were that the sleep/wake cycle gradually settled down to 25 hours. Siffre carried out a few more experiments like this for shorter periods of time but still found the same results? From these two pieces of research two suggestions arise: There must be an endogenous pacemaker in control of the Circadian rhythm, since even in the absence of external cues we are able to maintain a regular daily cycle. ...read more.

Also you can?t extrapolate from animals to humans so it is difficult to generalise results. However the findings are supported by Stephan and Zucker?s study. Psychologists are also interested in the effect of exogenous factors (zeitgebers). The main zeitgeber claimed to influence the body clock is light. Campbell and Murphy contribute to the theory (that light appears to be crucial in maintaining the 24 hour cycle) with an experiment in which bright light was shone onto the back of participants? knees and the researcher were able to alter their Circadian rhythms in line with the light exposure? The exact mechanism responsible for this is uncertain. But it seems possible that the blood chemicals were altered and this was detected by the SCN. Miles et al?s study shows importance of zeitgebers as perhaps the endogenous factors dominated because the blind individual in their study couldn?t access the key zeitgeber which is light. Based on various pieces of research we can say our Circadian rhythms appear to be internally and externally controlled. During isolation from zeitgebers our endogenous clocks seem to be set to a 25 hour cycle, but exogenous factors such as light or social factors seem to reset our clock daily (shown in Luce and Segal?s study ? those in the artic keep their clock to 24 hours by use of social communication). ...read more.

Support of Kleitman came from Friedman and Fischer who found 90-120 minute cycles of oral waking behaviour such as eating and drinking. Dement and Kleitman used EEGs and were able to wake participants during each stage of sleep. They asked participants to report their feelings, experience, and emotions. They found that those awoken during REM sleep reported dreams 80-90% of the time and recalled in great detail. One strength of this research is that the results show universality as the same characteristics of sleep are shown universally. Another strength is that it has real life application; the results can be used to predict when a person is actually dreaming. However a weakness of this study is that it was carried out in a laboratory so it lacks ecological validity, on the other hand it means that extraneous variables can be controlled, and so cause and effect can be established. Dement and Wolpert used the same technique to find that all humans dream and that people who don?t report dreams just forget them. They also found that dreams don?t last longer than 15 minutes, also eye movement during REM sleep can correspond with dream content and that content can be affected by the day?s events. One criticism is that self-report was used so reliability is decreased as participants might make things up. Strengths of research into Ultradian rhythms are that in many of them scientific methods are used such as use of EEGs which are repeatable and reliable. Also the findings can influence theories and further experiments. ...read more.

The writer has covered quite a lot in this short essay. They have also included quite a lot of relevant studies. The score however, is not as high as it could be because of the writing style. Some of the explanations are too brief and the writer moves quickly on from one point to another.The essay seems rather crammed as a result.

The writer needs to pay more attention to detail and improve their writing style in order to get a higher score.