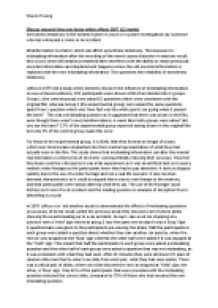 Discuss research into one factor which affects eyewitness testimony

The use of the footage cause distress as it was of a car accident and the leading question is example of deception thus a debriefing is crucial. In 1978 Loftus et al. did another study to demonstrate the effects of misleading questions on accuracy of event recall, unlike the previous study they showed a set of photo slides showing the events leading up to a car accident. Group 1 saw a red car stopping at a junction with a ?Yield? sign where as group 2 saw the same one except it was a ?Stop? Sign. A questionnaire was given to the participants are viewing the slides. Half the participants in each group were asked a question about whether they saw another car pass by, when the red car was stopped at the ?Stop? sign whereas the other half were asked if it was stopped at the ?Yield? sign. This meant that half the participants in each group were asked a misleading question and the other half of each group were asked a question that was not misleading, as it was consistent with what they had seen. ...read more.

It was found in this study that the memory of the participants who were provided with the misleading information was nearly as accurate as that of those provided with the consistent non-misleading information. Bekerian and Bowers concluded that the original memory wasn?t lost for the participants and that the display of the slides in the correct order provided sufficient cues for the original memory to be retrieved, despite the misinformation provided. This opposes Loftus? conclusion that the information is displaced, where instead the information is just covered but can still be uncovered again. However there has been criticism towards this study as McCloskey and Zaragoza (1985) could not replicate the findings therefore shows that it lacks reliability. Loftus? two studies provides sufficient evidence as well as the Bekerian and Bowers? study that misinformation does indeed have an effect on eyewitness testimony however one study (Bekerian and Bowers) argues that misinformation does not displace the encoded memory however its results has not be able to be replicated therefore Loftus initial conclusion that misinformation can alter a person?s mental representation of an event still stands although its ecological validity may question if it can be applied to eyewitness testimonies or not. ...read more.