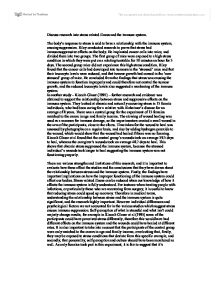 Discuss research into stress-related illness and the immune system

Discuss research into stress-related illness and the immune system. The body's response to stress is said to have a relationship with the immune system, causing suppression. Riley conducted research to prove that stress had immunosuppressive effects on the body. He implanted cancer cells into mice, and divided them into two groups. The first group of mice were exposed to a high stress condition in which they were put on a rotating turntable for 10 minutes an hour for 3 days. The second group mice did not experience this high stress condition. Riley found that the cancer cells had developed into tumours in the 'stressed' mice and that their leucocyte levels were reduced, and that tumour growth had ceased in the 'non-stressed' group of mice. He concluded from the findings that stress was causing the immune system to function improperly and could therefore not control the tumour growth, and the reduced leucocyte levels also suggested a weakening of the immune system. In another study - Kiecolt-Glaser (1995) - further research and evidence was obtained to support the relationship between stress and suppressive effects on the immune system. ...read more.

However individual differences and psychological factors are not accounted for in the various studies which suggest stress causes immune suppression. Self-perception of what is stressful and what isn't could majorly change results, for example in Kiecolt-Glaser et al (1995) some of the participants could have perceived stress differently, therefore this would have had different effects on the immune system and the wounds could have healed at different rates. It is also important to take into account that the participants of the control group were only matched to the carers in age and family income, overlooking that, firstly, they may be exposed to stress conditions that deviate from this specific example, and secondly, that personality, self-perception and culture should have been monitored as well. As only females took part in this experiment, it is fair to suggest that it's conclusions are not necessarily representable to males. Another factor that can be evaluated in this study is how lifestyle could affect immune functioning. More of the carers were married and were non-smokers, both of these relating to lower stress, social support and non-smoking being related to better immune functioning. ...read more.

Robles et al (2005) even found in their study that chronic stress enhanced some aspects of immune functioning. These contrasting ideas reflect that the immune system is very complex, and that the assessments that have been made in research are often too simplistic to be able to say it is stress that has an affect on the immune system. For instance in Riley's study lymphocyte levels were used as a measure of immune damage, but this may be too simplistic of a measure, and thus it lacks reliability and validity. This study has further implications in that mice were used instead of human beings, so other factors such as personality, culture and self-perception would be either very difficult to measure, or simply do not exist within a species lacking in the social intelligence of humans, and is therefore not representative of human's response to stress and how it effects immune function. To summarise the research that links the body's response to stress and immune suppression is correlational: we can say that there is a relationship between the two variables, but not stress does not directly cause a suppression of the immune system. ...read more.

This is a great essay. It is not too long and doesn't try to pack in too many studies or too much procedural detail, but it is packed with analysis and evaluation of research and commentary on the conclusions that can and can't be drawn. One of its strengths is the way that studies have been counterposed to draw out points of comparison and contrast. Excellent