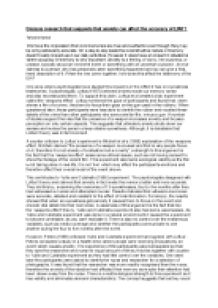 Discuss research that suggests that anxiety can affect the accuracy of eye witnesses.

﻿Discuss research that suggests that anxiety can affect the accuracy of EWT? Tahanie Kamal We have the impression that vivid memories are true and authentic even though they may be only particularly accurate. On a day-to-day basis the reconstructive nature of memory doesn?t really impact upon our daily activities. However it does have an impact in situations where accuracy of memory is very important. Anxiety is a feeling of worry, nervousness, or unease, typically about an imminent event or something with an uncertain outcome. An eye witness is a person who has personally seen something happened and so can give a first-hand description of it. When the two come together, how does this affect the testimony of the EW? One area where psychologists have studied this impact is in the effect it has on eyewitness testimonies. A psychologist, Loftus (1987) ...read more.

a strength to this argument is the fact that the ?weapons effect? raises some ethical issues, such as not having consent to show the footage of the violent film. This experiment also lacks ecological validity as the film is not taking place in real life, it is not ?live? which may affect the participants emotions and therefore affect their overall recall of the event shown. This contributes to Yullie and Cutshalls (1986) experiment. The psychologists disagreed with Loftus? theory and claimed that anxiety in fact made the memory better and more accurate. They did this by, examining the memories of 13 eyewitnesses, four to five months after they had witnessed a murder and attempted murder. Results indicated that witness?s memories were accurate, detailed and resistant to the effect of misinformation. Put simply, the results showed that when an eyewitness gets anxiety it causes them to focus on the event and encode vital detail into their memories. ...read more.

One week later the participants were asked to identify the nurse and researcher for a selection of photographs. It was found that the researcher was more readily recognised than the nurse; therefore the anxiety of the injection had affected their memory as maybe their attention had been drawn away from the nurse. There is a methodological strength to this experiment as it has validity and eliminates demand characteristics. The concept suggests that as they could not remember the nurse, their memories had been affected by the anxiety of receiving the needle. Each argument raised has some strength and weakness to them. The balance of evidence suggests that to have a good memory when in an anxiety based event, we need a medium amount of anxiety to be able to retain information. Which leads me onto the, Yerkes-Dodson?s law. This law suggests that with low anxiety we wouldn?t remember anything as our attention would be low and with high anxiety we also wouldn?t retain anything as it would be hard to focus on a set amount of things. ...read more.