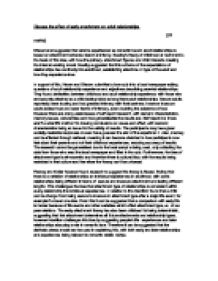 Discuss the affect of early attachment on adult relationships.

Self report methods aren't a scientific method for drawing conclusions on cause and affect, with demand characteristics being an issue for the validity of results. The participants may have given socially desirable responses or even have guessed the aim of the experiment. Also, memory can be affected through retrieval, meaning it can become distorted to how participants now feel about their parents and not their childhood experiences, reducing accuracy of results. The research cannot be generalised due to the local sample being used, only collecting the data from those who read the local newspaper and filled in the quiz. ...read more.

In relation to this Hamilton found that a child can be change from being secure to insecure in attachment type after a major life event, for example if a loved one dies. From this it can be suggested that a comparison with early life is harder because of life events and other variables which affect attachment type, such as peer relations. The early attachment theory has also been criticised for being deterministic, suggesting that first attachment determines all future attachments and relationship types, however Hamilton challenges this idea by suggesting people's life experiences and later relationships also play a role in romantic love. Therefore it can be suggested that the diathesis stress model can be used in explaining this, with both early and later relationships and experiences being relevant to romantic relationships. ?? ?? ?? ?? ...read more.

Quite brief but reasonable attempt to use two research papers to evaluate how early attachment styles may influence adult relationships. The introduction needs to put the essay in its context with more on Bowlby and limitations and advantages of his theory and then use the research. 3*