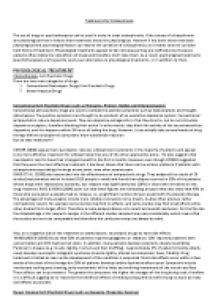 Discuss the Main Treatments for Schizophrenia

﻿Treatments for Schizophrenia The use of drugs or psychotherapies can be used in order to treat schizophrenia. If the causes of schizophrenia are physiological then it follows that treatments should be physiological. However it has been shown that both physiological and psychological factors can lead to the condition of schizophrenia, so it makes sense to consider both forms of treatment. Physiological treatments appear to fail not because they are ineffective but because patients often dislike the side effects of drugs and therefore don?t take them. As a result, psychological treatments (psychotherapies) are frequently used as an alternative to physiological treatments, or in addition to them. PHYSIOLOGICAL TREATMENT Chemotherapy- Anti Psychotic Drugs There are two main categories of drugs- 1. Conventional Neuroleptic Drugs/ Anti Psychotic Drugs 2. Newer Atypical Drugs Conventional Anti Psychotic Drugs (such as Thorazine, Prolixin, Haldol and Chlorpromazine) Conventional anti psychotic drugs are used to combat the positive symptoms such as hallucinations and thought disturbances. The positive symptoms are thought to be products of an overactive dopamine system. Conventional antipsychotics reduce dopamine levels. They are dopamine antagonists in that they bind to, but do not stimulate dopamine receptors, therefore blocking their action. In other words, they block the activity of the neurotransmitter dopamine, and this happens within 24 hours of taking the drug. ...read more.

On the other hand there are major downsides to the use of drugs as a treatment for schizophrenia, these include: that drug therapy is basically palliative treatment as it only suppresses symptoms rather than addressing and reducing or eliminating the underlying processes responsible for causing the disorder, therefore drugs/chemotherapy can be a reductionist approach. Also some patients may be resistant to drugs so drugs are not effective with everyone although those who do not respond to traditional drugs often respond to atypical ones. Finally, there is a huge battle with getting the correct dosage for an individual as high doses produce side effects however low doses reduce side effects but also make the drugs less effective towards the treatment of schizophrenia. There is also a problem with compliance; patients are often reluctant to take drugs (or continue taking them) because of the side effects which can lead to tragic results in some cases, since they do not ?cure? schizophrenia, drugs will have to be continued intermittently for life which in itself has issues due to the increased likelihood of disabling side effects with long term treatment. Psychology Treatment Cognitive Behavioural Therapy (CBT) CBT is now the most commonly used form of psychological therapy. CBT therapists assume that people with schizophrenia have irrational thoughts and beliefs about themselves and about the world around them. ...read more.

Appropriateness of CBT- It is commonly believed within psychiatry that not everyone with schizophrenia may benefit from CBT. In a study of 142 schizophrenic patients, KINGDON & KIRSCHEN (2006) found that many patients were not deemed suitable for CBT because psychiatrists believed they would not fully engage with the therapy. In particular they found that older patients were deemed less suitable than younger patients. This leaves some questioning around age bias and treatment. However, on the other hand CBT can be argued to be a very appropriate form of treatment for people with schizophrenia as several symptoms of schizophrenia are mainly cognitive in nature, such as the negative delusions, hallucinations and the disorganised speech, therefore CBT as a psychotherapy could be used to counteract these symptoms very successfully. CBT could also be useful in putting the patient?s minds at ease, for example patients with schizophrenia are often concerned about their bizarre delusions and hallucinations, but realising during therapy that similar delusions and hallucinations sometimes occur in healthy people may be useful in improving their mental state. On the other hand, there are some downfalls of CBT within the treatment of schizophrenia, for example, CBT is designed to reduce only certain positive symptoms so it is not appropriate form of treatment for reducing or eliminating negative symptoms, such as the lack of emotion. Therefore could be quite a reductionist approach. Also CBT, does not take into account biological factors or the biochemistry behind the possible cause of schizophrenia, therefore also another reductionist argument against CBT. ...read more.