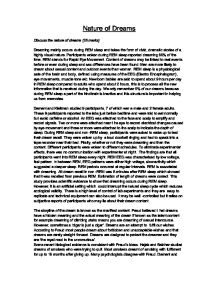 Discuss the nature of dreams

Nature of Dreams Discuss the nature of dreams (25 marks) Dreaming mainly occurs during REM sleep and takes the form of vivid, dramatic stories of a highly visual nature. Participants woken during REM sleep reported dreaming 80% of the time. REM stands for Rapid Eye Movement. Content of dreams may be linked to real events before or even during sleep and s*x differences have been found: Men are more likely to dream about s****l content and outdoor events than women. REM sleep is a physiological sate of the brain and body, defined using measures of the EEG (Electro Encephalogram), eye movements, muscle tone etc. New born babies are said to spend about 9 hours per day in REM sleep compared to adults who spend about 2 hours, this is to process all the new information that is received during the day. We only remember 5% of our dreams because during REM sleep a part of the hindbrain is inactive and this structure is important in helping us form memories. Dement and Kleitman studied 9 participants, 7 of which were male and 2 female adults. ...read more.

The storyline of the dream is known as the manifest content. Freud believed that dreams have a hidden meaning and the actual meaning of the dream if known as the latent content for example dreaming of climbing stairs means you are dreaming of s****l intercourse. However, sometimes a 'cigar is just a cigar'. Dreams are an attempt to fulfil our wishes. According to Freud most people dream about forbidden and unacceptable wishes and that dreams are rarely straight forward. Dreams are designed to protect the dreamer and they are 'the royal road to the unconscious'. Some recent biological evidence is consistent with Freud's ideas. Hajek and Belcher studied dreams of smokers who were trying to quit. Most smokers dreamt of smoking with fulfilment for up to 18 months after giving up. Many psychologists disagree with Freud. Dement and Wolpert reported that volunteers who were sprayed with water while asleep were more likely to dream of water than volunteers who did not get sprayed with water. Freud's theory was a starting point to dream theories and has been a topic which has been frequently discussed in psychology. ...read more.

Nightmares occur at all ages and mostly occur during REM sleep and take the form of vivid and frightening dreams. Night terrors are a more extreme version of nightmares. These are characterised by screaming and often violent physical movements. The Old Hag was thought to be a spirit that visits people in the night while they sleep. Those who survive this visit report being awoken with a feeling of dread and unease but unable to move or speak. They often feel a great pressure on their chest making it difficult to breathe and sometimes see an old hag before them or near them in the room. Overall, it is virtually impossible to interpret dream symbolism in a scientifically rigorous way. We have to rely on the subjective reports of the dreamer which is not a scientific method. Many dreaming studies are often done on humans and animals that are deprived of stages of sleep - the findings may be a result of disruption of biological rhythms. Dream reporting often takes place in a sleep lab which differ significantly to those reported under normal conditions, so it lacks ecological validity. To try and reduce this researchers often ask participants to sleep right through one night in the lab before research starts. ...read more.