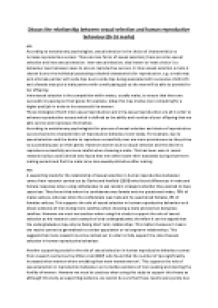 Discuss the relationship between sexual selection and human reproductive behaviour

AO2: A supporting study for the relationship of sexual selection in human reproductive behaviour comes from research carried out by Clarke and Hatfield (1989) who found differences in male and female responses when using confederates to ask random strangers whether they wanted to have casual sex. They found that when the confederate was female and she questioned males, 70% of males said yes, whereas when the confederate was male and he questioned females, 0% of females said yes. This supports the role of sexual selection in human reproductive behaviour as it shows evidence of men being more carefree when choosing a mate and women being less carefree. However we must we cautious when using this study to support the role of sexual selection as the research used a sample of only undergraduates, therefore it can be argued that the undergraduates may only be facing short term relationships. ...read more.