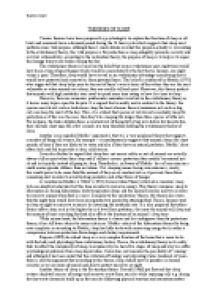 ﻿Nadira Islam THEORIES OF SLEEP Various theories have been proposed by psychologists to explain the function of sleep as all birds and mammals have a dormant period during the 24 hour cycle which suggests that sleep must perform some vital purpose, although there?s much debate on what this purpose actually is. According to the evolutionary theory, this vital purpose is for protection as sleep allegedly promotes security and survival. Alternatively, according to the restoration theory, the purpose of sleep is to help us to repair the damage done to our bodies during the day. The evolutionary theory is based on the belief that in our evolutionary past, night time would have been a time of great danger which would be exacerbated by the fact that as humans, our night vision is poor. Therefore, sleep would have served as an evolutionary advantage considering that it would have protected and removed us from potential harm. This belief is reinforced by Meddis (1975) who suggested that sleep helps prey to stay out of harm?s way at times of day where they are the most vulnerable as when animals are asleep; they are usually still and quiet. Moreover, this theory predicts that animals with high metabolic rates need to spend more time eating so have less time to sleep. ...read more.

It has been established that many restorative functions do indeed appear to occur while we sleep such as the process of digestion, protein synthesis and the removal of waste from muscles. Shapiro (1981) provided further support for this theory as after studying ultra marathon runners who has completed a 57-mile run, it was found that they slept 90 minutes longer than usual for the next two nights. REM sleep decreased while stage 4 for NREM sleep increased markedly from 25% to 45%. This strongly indicates and demonstrates that extra sleep was needed to repair the extra activity that their bodies underwent. REM sleep on the other hand was developed by Oswald (1980) and Hartman (1984) and is supposedly dedicated to restoring the brain. This theory was reinforced by Stern & Morgane (1974) who believed that neurotransmitter levels within the brain may be restored during SEM sleep. More sleep is needed for younger children and babies as their brain is growing and developing at its fastest rate. A newborn spends 9 hours a day in REM compared to 2 hours in adults. The restoration theory seems to make a lot of sense, particularly considering that we do indeed feel more refreshed after a healthy amount of sleep. ...read more.

In regards to ethnical issues, protection from harm is a big problem in this study as Tripp suffered many distressing side effects such as hallucinations. Randy Gardner (1965) also deprived himself of sleep by staying awake for eleven nights for a school science project. He reported blurred vision, slurred speech and mild paranoia. When Randy did sleep, he slept for 14 hours and 14 minutes the first night and two hours longer than usual on the next two nights. Despite losing 90 hours of sleep, he only made up for 11 hours. Nevertheless, he caught up on a disproportionate amount of his lost stage 4 and REM sleep suggesting they are vital stages. Again, it is difficult to generalise these case studies to the wider population due to the very small sample size. Human sleep deprivation studies do appear to support the restoration theory and they have emphasised how total sleep deprivation is fatal showing that it is an absolute necessity for us. However, sleep deprivation theories can often be very artificial which creates the issue of mundane realism. It has also be argued in these studies, the stress could result in the side effects instead ? especially as the participant is usually very closely monitored and observed. ...read more.