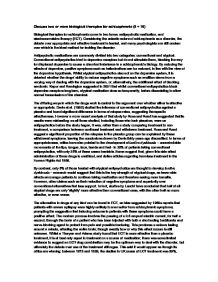 Discuss two or more biological therapies for schizophrenia (9 + 16) Biological therapies for schizophrenia come in two forms: antipsychotic medication, and electroconvulsive therapy (ECT). Considering the eclectic nature of schizophrenia as a disorder, the debate over appropriate and effective treatment is heated, and many psychologists are still unclear over which is the ideal method for tackling the disorder. Antipsychotic medications are commonly divided into two categories: conventional and atypical. Conventional antipsychotics bind to dopamine receptors but do not stimulate them, blocking the way for displaced dopamine to cause a chemical imbalance in a schizophrenic's biology. By reducing the effects of dopamine, positive symptoms such as hallucinations can be reduced, in line with the view of the dopamine hypothesis. Whilst atypical antipsychotics also act on the dopamine system, it is debated whether the drugs' ability to reduce negative symptoms such ...read more.

Ross and Read suggest a significant proportion of the relapses in the placebo group can be explained by these withdrawal symptoms, leaving the conclusions drawn by Davis thirty years ago discredited. In terms of appropriateness, critics have also pointed to the development of tardive dyskinesia - uncontrollable movements of the lips, tongue, face, hands and feet - in 30% of patients taking conventional antipsychotics, with only 25% of these cases treatable. Some suggest that, given this side effect administration of these drugs is unethical, and defies articles regarding harmless treatment in the Human Rights Act 1988. By contrast, only 5% of those treated with atypical antipsychotics are thought to develop tardive dyskinesia - research would suggest that this is the key strength of atypical drugs, as fewer side effects encourage patients to continue taking medication and therefore seeing more benefits. ...read more.

This produces a seizure lasting around a minute, affecting the entire brain; though exactly how or why this effect occurs is still unknown. Whilst a Tharyan and Adams study found that ECT is more effective than a placebo treatment, it is at best only equal to treatment on a course of medication; there was some limited evidence to suggest an ECT-drug combination may be the optimum way to deal with the disorder, but ultimately the debate over use of the treatment still rages. This said it would appear as though its critics are winning: between 1979 and 1999, the decline in UK cases of ECT treatment was 59%, most likely due to studies such as those by Read which have found memory dysfunction, brain damage and even death as side effects of the procedure. ...read more.

An absolutely outstanding essay. This will easily obtain full marks due to the profound levels of detail shown by the candidate. After explaining what both drug treatments (conventional and atypical) and ECT are, the candidate goes on to analyse the ...

An absolutely outstanding essay. This will easily obtain full marks due to the profound levels of detail shown by the candidate. After explaining what both drug treatments (conventional and atypical) and ECT are, the candidate goes on to analyse the strengths and weakness of the procedures in a very succinct and highly confident way. The written expression is clear and exceptionally precise - there are very few 'spare' words here that do not elicit marks; the candidate has taken care to ensure that they use specialist terminology where appropriate, and the balanced argument is presented coherently and non-prescriptively, which is the danger of some essays like this. The candidate has avoided the very pre-set formula that many Psychology many students are guided with when answering essays - though not a bad formula, to see candidates confident enough to venture beyond it and use their own analytical techniques is something examiners having to many thousands of the same essays will value greatly.

The Level of Analysis here is exceptional. It goes hand in hand with the extremely proficient level of depth giving to the explanation of both treatments for psychosis. The candidate shows an excellent ability to provide advantages and disadvantages with ECT and drug treatments, citing appropriate studies and their evidence - in great detail - to fortify their answer. The candidate applies all appropriate specialist vocabulary like "relapse" and "antipsychotics" to show the examiner they are aware of the language psychologists use to describe mental disorders and their characteristics, which is indicative of someone who has clearly taken the time to appreciate the language of Psychology so that they can clearly, precisely and accurately word their essays. The candidate would expect to achieve full marks (25/25) and a firm A grade for this essay.

The Quality of Written Communication (QWC) follows trend from the rest of the essay. Before coursework submission, this candidate must have taken extra precaution to ensure that their QWC is perfect as there are no grammatical errors to speak of. Even the more complex and challenging vocabulary is spelt correctly and the sentences structures lend themselves well to the analytical writing style. A fantastic essay worthy of it's 25 marks.