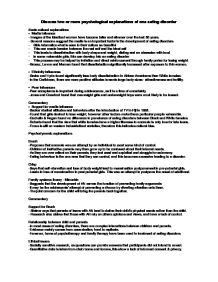 Discuss two or more psychological explanations of one eating disorder.

Discuss two or more psychological explanations of one eating disorder Socio-cultural explanations � Media influence - Images of the idealized women have become taller and slimmer over the last 50 years. - Several reasons suggest the media is an important factor in the development of eating disorders - Girls internalize what is seen in their culture as beautiful - This can create tension between the real self and the ideal self - This leads to dissatisfaction with body shape and weight, dieting and an obsession with food - In some vulnerable girls, this can develop into an eating disorder - This process may be helped by imitation and direct reinforcement through family praise for losing weight. -Groesz, Levne and Murnen found that dissatisfaction significantly increased after exposure to thin women. � Ethnicity influences -Grabe and Hyde found significantly less body dissatisfaction in African-Americans than White females. -In the Caribbean, there are more positive attitudes towards large body sizes - attractiveness and fertility. � Peer influences -Peer acceptance is important during adolescence, as it is a time of uncertainty. -Jones and Crawford found that overweight girls and underweight boys were most likely to be teased. ...read more.

-They find it difficult to associate good feeling with things that people find pleasurable, e.g. food. Commentary � Part of the hypothalamus that controls feeding behaviour. Serotonin has been implicated in AN trait. � SRRIs are ineffective when used with AN patient; however Kaye found that they prevented a relapse. � w**g et al found there were normal levels of dopamine receptors in obese individuals. � Treatment implications force patient to reduce any guilt caused by the view that it's the parents fault. � Gender bias, not necessarily a female only problem. Genetic explanation Compare rates of AN in MZ twins with rates in DZ twins. Holland et al and Kendler et al found that concordance rates for MZ twins were significantly higher. Bulik concluded from these studies that the genetic contribution to both AN and BN is 50-80% Holland et al � To investigate the genetic contribution to AN using MZ and DZ twins, one has been diagnosed with AN. � 30 female twin pairs (16 MZ and 14 DZ), four male twin pairs and one set of male triplets. � 55% concordance rate for MZ, 7% for DZ. � Five of the non-anorexic female co twins had either other psychiatric illnesses or minor eating disorders. ...read more.

-Therefore, it would have been adaptive for humans to have evolved with an innate preference for sweetness Preference for meat -Without meat, its claimed humans wouldn't have gained enough nutrition to become active and intelligent -A diet containing meat is a far more efficient means of obtaining protein. -Large occasional kills would mean that humans spend less time feeding themselves and the group Taste aversion -If we eat food that makes us sick, it would be an evolutionary advantage to avoid that food in the future. -Garcia, Rusiniak and Brett made wolves sick with contaminated lamb's meat, they would later leave sheep. -Suggests that they had learned to associate the poison with the sheep. -Contributes to keeping the animal alive as it will affect the animal's behaviour in the future. Commentary -Evolutionary explanations can account for innate food preferences, increased level of world obesity. -Capaldi found that all ages and other species prefer sweet food tastes than any other taste. -Bell found that it's not culturally learnt, as Eskimos preferred sweet foods. -Gibson and Wardle found that children were likely to choose bananas and potatoes, rich in calories. -This suggests an evolved preference for calorie rich foods. ...read more.