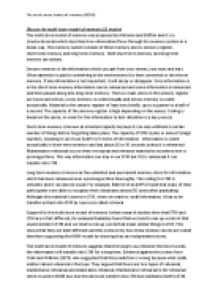 This way information can stay in our STM but if it is rehearsed it can transfer into LTM. Long-term memory is known as the unlimited and permanent memory store for information which has been rehearsed over a prolonged time thoroughly. The coding for LTM is semantic and it can also be visual. For example, Bahrick et al (1975) found that many of their participants were able to recognise their classmates almost 50 years after graduating. Although this material is stores in LTM, when we want to recall information, it has to be transferred back into STM by a process called retrieval. Support for the multi-store model of memory is that research studies show that STM and LTM are in fact different, for example Baddeley found that we tend to mix up words in that sound similar in STM and we tend to mix up words that mean similar things in LTM. ...read more.

This is a limitation of the MSM because it is a research finding that cannot be explained by the model. Another limitation is that the MSM states is a unitary store, meaning that there is only one type of short-term memory- but research has found that there is in fact more than one type of STM. Evidence against this comes from Shalice and Warrington (1970) who studied a patient with a clinical condition called amnesia. They found that KF?s short-term memory for digits was poor when read aloud to him however, when he was able to read the digit himself his recall was much better. The unitary STM is a limitation of the MSM because research shows that at the very least there must be one short-term store to process visual information and another one to process auditory information. However, the working-memory model includes these separate stores. ...read more.